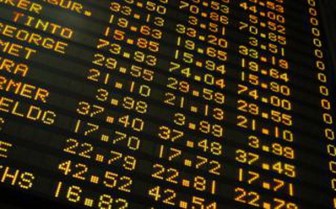 Economy Has Green Shoots From China to U.S. as Data Surprise

The U.S. and China, the world’s traditional twin sources of growth, are planting seeds to lift the world economy from its midyear slowdown.

Among the green shoots indicating faster expansion: strongerhousing demand and hiring in the U.S. and accelerating factory output and retail sales in China. Responsible for a third of the world economy, the two countries are now providing ballast internationally as Europe and Japan stagnate.

“China and the U.S. are both improving, which is extremely good news,” Jim O’Neill, chairman of Goldman Sachs Asset Management, said in a telephone interview. “If we could pretend Europe and Japan didn’t exist, the world would be fine.”

The rebound’s endurance may depend on whether authorities can clear a fog of doubt surrounding policy. U.S. lawmakers are debating how to curb $607 billion in automatic tax increases and spending cuts by year-end, while a once-in-a-decade leadership shift in China may raise questions about its direction. Elsewhere, Europe’s crisis-fighting remains erratic and Japan faces its own fiscal and political dilemmas.

“Policy uncertainty is affecting business confidence, delaying capital expenditure especially in the U.S.,” said Tim Drayson, global economist at Legal & General Investment Management in London and a former U.K. Treasury official. “The potential if we get a resolution of some of these issues is a release of pent-up demand.”

Confidence in the economic outlook was highlighted by a survey of fund managers released Nov. 13 by Bank of America Merrill Lynch. Global growth expectations were the most optimistic since February 2011 and the outlook for China’s economy surged to a three-year high.

For the first time in seven months a majority said profits will improve rather than deteriorate. More investors said companies should use idle cash to grow and increase capital spending rather than repair balance sheets or buy back shares. A net 37 percent of asset allocators said they were overweight in global emerging-market equities, up from 32 percent last month.

Strategists at Aviva Investors Global Services Ltd. said yesterday that more expansive monetary policies mean they attach a 65 percent probability to the world economy enjoying “better days” over the next six months with only a 20 percent chance growth stalls.

“The risk has abated somewhat, but we’re still awfully close,” Bank of Israel Governor Stanley Fischer said in an interview in Jerusalem yesterday. He said last month the world was “awfully close to a recession.”

Even so, Rockwell Automation Inc. (ROK), a Milwaukee-based maker of software for factories, is among companies forecasting an economic turnaround.

“We’re counting on market conditions improving early enough to have a positive impact on the second half of our fiscal 2013,” Chief Executive Officer Keith Nosbusch said during a Nov. 5 conference call with analysts.

Third-quarter profits at Kentucky-based Yum! Brands Inc. (YUM), owner of the Taco Bell and KFC fast-food chains, topped analysts’ estimates on sales gains in the U.S. and China.Kimberly-Clark Corp. (KMB), the Dallas-headquartered maker of Huggies diapers and Kleenex tissues, reported earnings in the same period that exceeded estimates and raised its forecast for profit this year amid sales gains in Latin America.

In a sign the world economy is emerging from its rough patch faster than economists anticipated, Citigroup Inc. gauges of whether incoming data exceeds or undershoots forecasts show U.S. and China indicators are increasingly proving stronger than anticipated. The so-called surprise index for the U.S. is at 57, up from a 2012 low of minus 65.30 in July, while China’s has risen to 27.30 from minus 87.80 in May.

Behind the upward turn is continued stimulus from monetary policy makers and a potential recovery in industrial growth after manufacturing production fell 2.6 percent in the three months through September, said David Hensley, director of global economic coordination at JPMorgan Chase & Co. in New York. Order books and inventories suggest the slide may now begin reversing.

“We’re quite confident about the signs of stabilization,” Hensley said in a telephone interview. “We expect some modest acceleration and we’re seeing signs of it if not full confirmation.”

In the U.S., consumer spending, the biggest part of the economy, and an improving housing market are leading the expansion amid rising confidence, better employment prospects and healthier household finances. The pickup comes as the Federal Reserve undertakes its third round of quantitative easing.

In the housing industry, which helped trigger the last recession, residential real-estate prices increased in the year ended August by the most in two years. Housing starts surged 15 percent in September to the highest level in four years.

“If housing continues to recover, that’s going to underpin the economy,” Bill Miller, chairman of Legg Mason Capital Management, told Bloomberg Television on Nov. 2. “The economy is probably in a troughing process. That would lead to growth next year.”

Overseas demand for U.S. products may also be proving resilient. Exports gained 3.1 percent in September, the biggest increase since July 2011, to a record $187 billion amid shipments to South and Central America.

“We see upside in the U.S. market coming from exports,” Michael Sutherlin, CEO at Joy Global Inc. (JOY), a Milwaukee-based maker of mining equipment, said in a Nov. 6 conference presentation. “The fundamentals in the U.S. market are moving in the right direction.”

Still, in a sign the economy isn’t surging back, retail sales fell in October for the first time in four months, a report showed yesterday.

In China, the economy is growing at a rate closer to 8 percent after a seven quarter-slowdown, even though monetary easing has been on hold since July.

Factory output and retail sales exceeded forecasts in October and exports rose the most since May. The median estimate of analysts surveyed by Bloomberg News is for an acceleration of gross domestic product growth to 7.7 percent this quarter and 7.9 percent in the subsequent three months.

Alicia Garcia-Herrero, chief economist for emerging markets at Banco Bilbao Vizcaya Argentaria SA in Hong Kong, credits previous Chinese stimulus and acceleration in infrastructure construction for the rebound. A bonus is that the economy also may be pivoting away from its previous reliance on foreign demand toward domestic spending, she said.

Still, signs of malaise endure in the euro area and Japan. A report today showed the 17-nation single currency bloc fell back into recession in the third quarter as the three-year sovereign debt crisis threatens to engulf Spain and finance chiefs mull how to fill a fresh hole in Greece’s balance sheet.

Economic confidence in the bloc fell to its lowest since 2009 last month and unemployment climbed in September to a record 11.6 percent. Industrial production tumbled the most in more than three years in September. Uncertainty also abounds as Spain resists a bailout request, which would trigger bond-buying from the European Central Bank.

Perhaps worse still are signs the region’s core economies have been infected. Germany, Europe’s largest economy, had larger-than-expected declines in exports, factory orders and industrial production in September, while business confidence unexpectedly dropped to its lowest in more than 2 1/2 years.

Portuguese GDP fell for an eighth quarter in the three months through September and unemployment reached a euro-era record of 15.8 percent, while Greece’s economy contracted for a 17th straight quarter, figures yesterday showed.

It’s even worse in Japan, where GDP fell an annualized 3.5 percent last quarter amid slumping exports and consumer spending. Analysts polled by Bloomberg predict the contraction will extend into the final three months of the year. That’s hurting companies: Sharp Corp. (6753) andPanasonic Corp. (6752) are among those expecting losses this fiscal year.

The nation also faces an election: Prime Minister Yoshihiko Noda said yesterday he would dissolve the lower house of parliament on Nov. 16 amid disapproval ratings as high as 64 percent. The national vote is scheduled for Dec. 16.

Underscoring the threats of uncertainty and fiscal consolidation, Moody’s Investors Service revised down its forecasts for the Group of 20 economies this week to show growth of about 3 percent next year, barely above the 2.7 percent of 2012.

While President Barack Obama has secured re-election and Greece nears another handout, more is possible. Deutsche Bank AG economists calculate a successful resolution of the U.S.’s so- called fiscal cliff could boost expansion by as much as two percentage points.

The Chinese Communist Party’s handover of power from party head Hu Jintao to Xi Jinping will create a leadership with “new energy,” said Chen Zhiwu, a finance professor at Yale University. That means “good news for the remainder of the year and first half of 2013” in China.

“The global economy could tip into a much better equilibrium if proper political cooperation in Europe and the U.S. were to unleash into proactive uses all the spare cash that is idling on the sideline,” said El-Erian in Newport Beach, California.

The recent pickup may still be rubbing off on other Asian economies, typically bellwethers for the health of international trade. Shipments from South Korea and Malaysia unexpectedly rose in October and Indonesia’s dropped less than predicted.

In South America, Brazil is also showing signs of recovery after slowing demand for exports led to a year of stagnation. GDP will increase 4 percent in 2013 from a projected 1.5 percent this year, according to a central bank survey of around 100 economists. The reason: a series of stimulus measures from tax breaks for industry to interest rate cuts. Outstanding loans grew 15.8 percent in the 12 months through September and car sales jumped 21.8 percent in October from a year earlier.