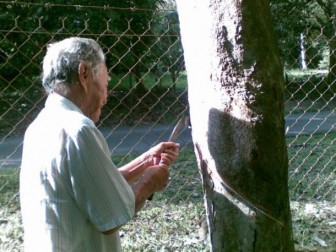 TOKYO, Nov 15 (Reuters) – Key TOCOM rubber futures rose more than 2 percent on Thursday as the yen slumped against the dollar on the possibility of strong monetary easing measures to support the Japanese economy.

“Rubber jumped on the back of the sharp dollar/yen move, which sent some commodities to a new level” said a Tokyo-based trader.

The market was also helped by news that Germany and France posted modest growth in the third quarter, the trader said.

“But it is going to take time to resolve the European financial crisis, so rubber will probably see some profit taking tomorrow,” he said.

TOCOM futures may fall as far as 245 yen on Friday or early next week, the trader said.

The yen hit a 6-1/2 month low against the dollar on Thursday after the head of Japan’s main opposition party, the frontrunner in next month’s election, called for aggressive monetary easing by the Bank of Japan to support growth.

Germany and France each grew modestly by 0.2 percent in the third quarter but with the euro zone’s debt-laden members suffering deeply, the currency bloc as a whole is likely to have slid into recession.

In Shanghai the most active rubber contract for May delivery  rose 0.8 percent to 24,195 yuan per tonne.

The front-month December rubber contract on the SICOM in Singapore was last traded at 280 U.S. cents per kg, up 0.7 cents. (Reporting by Aaron Sheldrick; Editing by Sunil Nair)