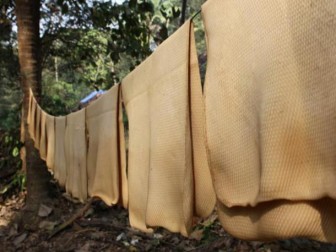 * But dealers say long-term impact will be limited

SINGAPORE/BEIJING, Nov 16 (Reuters) – China, the world’s largest rubber consumer, has started buying natural rubber from domestic markets to support prices in its first stockpiling effort for the commodity since 2009, the latest sign the country could be pushing ahead with stimulus measures as a new leadership takes the reins.

But the up to 2000,000-tonne purchase, reported by state media, may not have a long-term impact due to the country’s rising inventory and strong imports. January-September natural rubber imports were up 9.64 percent to 1.579 million tonnes year-on-year.

The government will buy 60,000 tonnes by year-end at 24,600 yuan ($3,900) per tonne, the China Securities Journal said on Friday, adding that weak demand from downstream industries and high stocks have pressured domestic rubber prices.

“The purpose for the stockpiling may be replenishing after the state reserves sold 60,000 tonnes in 2010. The other reason is that it may want to help out the upstream businesses in the rubber industry,” said a Shanghai-based dealer.

“You can see that the state reserve is buying sugar, cotton and metals right now.” The country’s state stockpile bought zinc and aluminium from domestic smelters on Thursday, in a step analysts have said could signal that Beijing was ready to push ahead with a programme of more direct stimulus for the economy.

Markets have been hoping the once-in-a-decade leadership change under way this week at a Communist Party congress in Beijing will open the door to more aggressive steps to support growth that is crucial to Western economies’ own recoveries.

LOSING ITS SIZZLE But global benchmark Tokyo rubber futures fell 2.0 yen a kg to 249 yen kg on Friday despite the news, while the most active May contract on Shanghai Futures Exchange gave up early gains and dropped 45 yuan to 24,150 yuan a tonne.

Prices in Shanghai have plunged more than 40 percent from this year’s peak at 43,310 yuan in February.

China’s once sizzling auto market has been under pressure this year due to a slowing economy and rising fuel costs, stifling demand for rubber used to make tyres.

“We doubt if the government can purchase that much (200,000 tonnes) as some farms hedged their production in the futures market when prices were 26,000 yuan per tonne,” said Yang Jianjun, an analyst with Yongan Futures Co Ltd, adding that purchases would only be from some state-owned farms in Hainan and Guangdong provinces.

“The government price is not that attractive.” Rubber inventories in warehouses monitored by the Shanghai Futures Exchange rose 2.3 percent to 64,405 tonnes last week – their highest since January last year.

In 2009, the government purchased about 105,000 tonnes of rubber from the domestic market to boost reserves, help farmers and stabilise prices.