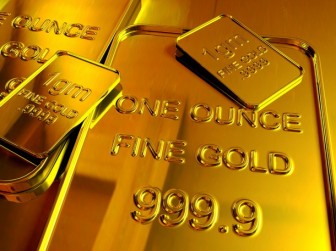 Gold down for week on recession, fiscal crisis fears

The metal posted a 1 percent drop this week and has fallen in five out of the past six weeks. News that the euro zone swung into a recession, disappointing U.S. economic data and Federal Reserve Chairman Ben Bernanke’s negative outlook on the housing recovery all kept pressure on gold.

Gold sagged as the S&P 500 equities index was on track for its largest two-week drop in about six months. Fears that the United States could lapse into recession if a combination of scheduled tax hikes and spending cuts is allowed to go forward weighed on all markets, analysts said.

“The severity of the recent equities decline has cast a shadow of fear over gold investors that continued capitulation in the stock market will force leveraged accounts to sell gold,” said Jeffrey Sica, chief investment officer of Sica Wealth, which manages over $1 billion in assets.

On the options front, heavy selling of a call spread between $1,700 and $1,670 an ounce for a low premium suggested dealers expected the market would not fall much lower, TD Bank precious metals strategists said in a note.

U.S. equities edged up on Friday after Congressional leaders vowed to find common ground on taxes and spending that would allow them to head off the looming fiscal crisis after their meeting with President Barack Obama.

Gold’s safe-haven status could shine in the case of failed talks and political paralysis, analysts said. Extreme fears over the first fiscal crisis last year and a downgrade of the U.S. credit rating ultimately sent gold to its record high of $1,920.30 an ounce in September.

Also underpinning gold was rising geopolitical tension in the Middle East due to escalating rocket attacks between Israel and Palestinian militants.

U.S. COMEX gold futures for December delivery settled up 90 cents at $1,714.70 an ounce. Trading volume was in line with its 30-day average, preliminary Reuters data showed.

Gold fell this week after a report from trade group World Gold Council showed that global gold demand dropped 11 percent in the third quarter from record levels in the same period last year.

Gold investment demand, however, remains resilient. Holdings of the SPDR Gold Trust, the world’s No. 1 gold-backed exchange-traded fund, rose to a level just shy of the record high hit in October.