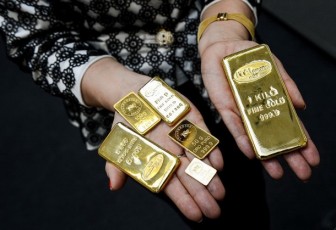 SINGAPORE (Reuters) – Gold traded slightly lower on Friday, heading for a weekly loss of about 1 percent, as festering uncertainty over the outlook for the global economy dragged on prices.

The U.S. “fiscal cliff” — tax hikes and spending cuts of nearly $600 billion that will kick in early next year if the Congress fails to avert them — is looming as a major concern in financial markets as it threatens to push the world’s top economy back to recession.

Gold’s safe haven status would shine in the case of failed talks and political paralysis, while success in avoiding the fiscal disaster may dampen the sentiment in gold, analysts said.

“If we don’t see an agreement and there is a gridlock, it will burden the dollar and benefit gold,” said Dominic Schnider, an analyst at UBS Wealth Management in Singapore.

The more probable result would be a compromise that did not completely solve the fiscal problem, which would also benefit gold, since the Federal Reserve would have to provide more stimulus to help the economy, he added.

“It is not going to be easy, and it will likely motivate renewed interest in demand for gold.”

Technical analysis suggested that spot gold could test support at $1,701 an ounce, a break below which will open the way towards $1,672.24, said Reuters market analyst Wang Tao.

The CME Group (CME.O) cut margins on gold and silver futures contracts in a bid to stimulate trading interest.

Gold has drifted around $1,720 an ounce over the past week or so as the support from U.S. President Barack Obama’s re-election faded and political uncertainty around the fiscal problems kept some investors on the sidelines.

But gold investment demand remains resilient. Holdings of the SPDR Gold Trust, the world’s largest gold-backed exchange-traded fund, rose to 1,339.616 tonnes by November 15, just a touch off the record high of $1,340.521 tonnes hit in October.

Prominent hedge fund manager John Paulson kept a major stake in gold in the third quarter of 2012, a confidence boost to bullion’s appeal as a hedge against economic uncertainty, a U.S. regulatory filing showed on Thursday.

Worries about the euro zone economy remain, as the region’s debt crisis dragged the bloc in the third quarter into its second recession since 2009, despite modest growth in Germany and France.