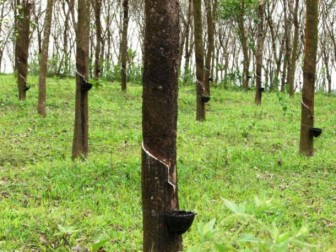 The benchmark Tokyo Commodity Exchange rubber contract for April delivery fell 2.6 yen to 248.4 yen per kg, slightly above the low for the day of 248.1 yen.

Investors were mostly taking profits after the contract jumped 2 percent on Thursday, when the yen fell to a 6-1/2 month low against the dollar, a Tokyo-based trader said.

The contract is up 0.8 percent on the week and is likely to trade between 245 yen and 252 yen next week, driven by the dollar-yen rate, the trader said.

“What the market needs is good economic news out of Europe, Japan or other parts of the world,” he said.

The yen steadied in Asian trading on Friday after plunging against the dollar in the previous session on expectations a new Japanese government could push the Bank of Japan to adopt interest rates of zero or below.

In Shanghai the most-active rubber contract for May delivery fell 45 yuan to 24,150 yuan per tonne.

The front-month December rubber contract on SICOM in Singapore was last traded at 279.1 U.S. cents per kg, down 1.6 cents.