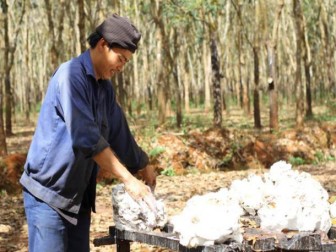 TOKYO, Nov 16 (Reuters) – Key TOCOM rubber futures fell on Friday as a two-percent rally the day before encouraged investors to take profits, with the yen stabilising after recent declines on the possibility of further monetary easing in Japan.

* The benchmark hit a one-week high of 252.4 yen on Thursday, helped by a sudden decline in the yen and news that the top three rubber producers would likely hold a meeting next month to seek ways to stabilise prices for the commodity.

* Thailand, Indonesia and Malaysia, which together account for 70 percent of global natural rubber output, agreed in August to restrict exports by about 3 percent of global production in an effort to prop up prices, but the move has so far had little impact.

* The April contract has risen 1.3 percent so far this week. It touched a two-month low of 241.8 yen on Monday and again on Wednesday.

* President-in-waiting Xi Jinping and the next premier, Li Keqiang, were anointed on Thursday as the top leaders of the Chinese Communist Party, as widely expected.

* Japan’s government cut its view of the economy for a fourth straight month in November, marking the longest such sequence since the 2008-09 financial crisis and underlining the view that the country is slipping back into recession as the global slowdown bites.

* Japan’s Nikkei share average climbed on Friday after the leader of Japan’s main opposition party, seen as likely to become premier after an election next month, called for more monetary policy easing.

* The yen steadied in early Asian trading on Friday after plunging to a six-and-a-half month low against the dollar in the previous session.

* Oil prices fell on Thursday when an increase in U.S. weekly jobless data and disappointing earnings results stoked economic concerns, and the market focused on violence in the Middle East.

* The following data is expected on Friday: (Time in GMT)