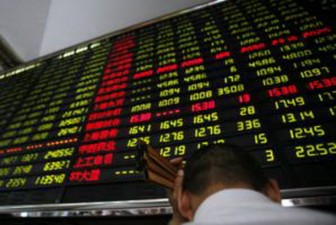 But shares on major markets were still headed toward a second consecutive weekly loss as the collective worry about the U.S. government’s fiscal problems and weak global economic growth weighed on sentiment.

Lawmakers sought to establish a conciliatory tone in their first round of talks on the so-called “fiscal cliff” after Pesident Barack Obama was re-elected to a second four-year term.

Senate and House leaders from both parties all described the initial discussions as “constructive.

“This is the first time we’ve had one iota of anything constructive being done,” said Todd Schoenberger, managing principal at the BlackBay Group in New York.

“That’s very positive, but you can be flexible and still have us go over the cliff. Wall Street traders remain very nervous and need something concrete to get done,” he said.

Investors have been concerned that if no deal were reached to modify automatic spending cuts and tax hikes, the U.S. economy could slip into recession. The S&P 500 has dropped 4.3 percent over the past two weeks, in part due to these worries.

The MSCI world equity index was down 0.3 percent at 316.58, and has lost almost 2 percent this week.

The FTSEurofirst 300 index of top companies shed 1.04 percent to 1,067.45 and posted its worst week since late September.

Benchmark Brent crude oil prices rose above $109 a barrel as a showdown between Israel and the Palestinians in Gaza stoked worries about supply. Investors were concerned that Arab producers may be drawn into any potential conflict, which could impact supply lines.

Adding to worries, a fire broke out at an oil and natural gas platform in the Gulf of Mexico, the U.S. Coast Guard said. The Coast Guard told local media that the platform was not actively producing.

The yen fell for a third day against the dollar and was on track for its worst weekly loss since mid-February as expectations of aggressive monetary easing from the Bank of Japan (EUREX: FMJP.EX- news) continued to curb the currency’s appeal

Japanese Prime Minister Yoshihiko Noda paved the way for a snap election on December 16. The lower house of parliament was dissolved on Friday.

Shinzo Abe, leader of the main opposition Liberal Democratic Party and seen as likely to be Japan’s next leader, on Thursday called for the country’s central bank to adopt interest rates of zero or below to spur lending.

“The basic driver is still the interest rate differential between the dollar and yen, which is very narrow, and we have to wait for what happens after the (Japanese) elections,” said Marcus Hettinger, global FX strategist at Credit Suisse (NYSEArca: CSMA – news) in Zurich.

The euro continued its downward drift as concerns over Greece’s debt struggle and Europe (Chicago Options: ^REURUSD – news) ‘s stagnant economy weighed. It was down 0.4 percent at $1.2725.