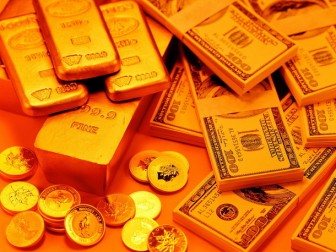 SINGAPORE, Nov 19 (Reuters) – Gold edged up on Monday after posting a 1 percent loss in the previous week, tracking a positive tone in equities on hopes of progress in the U.S. budget talks, while rising tensions in the Middle East supported its safe-haven appeal.

* Net long positions in U.S. silver edged up to 27,802 contracts from 27,350 contracts a week earlier, its lowest since late August.

* Republican and Democratic congressional leaders emerged from a meeting with President Barack Obama on Friday pledging to find common ground on taxes and spending that would allow them to avert an upcoming “fiscal cliff” that could send the economy back into recession.

* The escalating violence in the Middle East helps support gold’s safe-haven appeal. Israeli ministers were on Friday asked to endorse the call-up of up to 75,000 reservists after Palestinian militants nearly hit Jerusalem with a rocket for the first time in decades and fired at Tel Aviv for a second day.

* Hope that U.S. politicians would find common ground to steer clear of the “fiscal cliff” boosted stocks on Friday, though the gains were not enough to offset the week’s losses.

* The yen was hovering near a seven-month low versus the dollar at the start of the week, as expectations of more stimulus by Japanese authorities after next month’s election made holding the already low-yielding currency even less appealing.