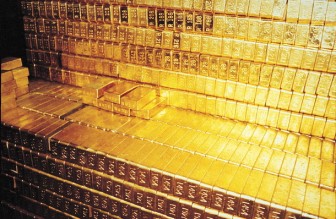 Gold up 1 pct on hopes over ‘fiscal cliff’ talks, Greece

* Signs of progress in U.S. talk over fiscal crisis help

NEW YORK, Nov 19 (Reuters) – Gold rose over 1 percent on Monday as optimism about talks to resolve the U.S. fiscal crisis and hopes Greece would receive more funding fuelled buying in bullion, as well as in equities and other commodities.

The metal has recovered all of last week’s losses that were blamed on fears of a global recession. Silver and platinum group metals also rose sharply on better demand expectation amid a brighter economic outlook.

Gold’s inflation-hedge appeal rose on signs that top Democratic and Republican lawmakers were confident they could reach a deal to avert automatic tax and spending cuts, which will come into effect in the new year and could trigger another recession, analysts said. Five-year Treasury Inflation-Protected Securities (TIPS) breakeven rate also rose as crude oil rallied 2.5 percent.

Monday’s better U.S. home resales pointed to a brighter economic outlook. However, traders said the economy has not improved enough to justify a tightening in U.S. monetary policies.

“Overall, some of the underlying things are only starting to heal in the economy and it appears that will keep monetary policy accommodative, which will reflect in higher gold prices,” said Axel Merk, chief investment officer of Merk Funds, which has about $600 million in assets under management.

Monday’s gains appear set to challenge the key technical resistance of the 50-day moving average at around $1,742 an ounce, which bullion has not breached in almost a month.

Gold also rose on a drop in the dollar against the euro on positive signs the euro zone would agree next week on two years of funding for Greece and leave further help to be decided later.

Also underpinning gold is the escalating conflict between Israel and Hamas in the Gaza strip. Analysts said safe-haven bids and higher crude oil prices due to geopolitical tensions are clearly benefiting the metal.

U.S. COMEX gold futures for December delivery settled up $19.70 at $1,734.40 an ounce, with trading volume about 25 percent below its 250-day average, preliminary Reuters data showed.

US FISCAL CRISIS IN FOCUS

Money managers are buying assets across the board as they now have a better picture regarding taxes and other White House policies after the re-election of President Barack Obama, said George Nickas, commodities broker at INTL FCStone.

Gold’s safe-haven status could shine in the case of failed talks and political paralysis, analysts said. Extreme fears over the first fiscal crisis last year and a downgrade of the U.S. credit rating ultimately sent gold to its record high of $1,920.30 an ounce in September.

While the Congress is unlikely to allow tax increases and spending cuts due to their far-reaching effects, ratings agency Fitch said the U.S. “fiscal cliff” could trigger a recession and push the unemployment rate above 10 percent.