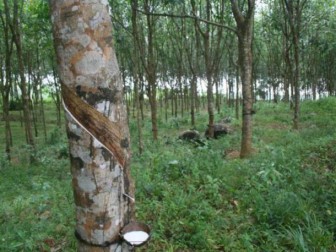 TOKYO, Nov 19 (Reuters) – Key TOCOM rubber futures rose 2 percent to a two-week high on Monday, helped by a jump in oil prices and the yen’s decline to a seven month-low on expectations of more monetary stimulus in Japan after an election there next month.

* Investors dumped the yen after the government set elections for Dec. 16 and the leader of the opposition LDP party, which is expected to win the poll, called on the Bank of Japan to print “unlimited yen” and set interest rates at zero or below zero to boost the economy.

* The yen hit its lowest level in nearly 7 months against the dollar on Monday as expectations of more stimulus after the election made holding the already low-yielding currency even less appealing.

* The Nikkei average climbed 1.7 percent to a two-month peak in early trade on Monday.

* The following data is expected on Monday: