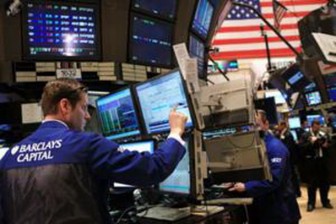 Global stocks and commodities surged on Monday to recover some of last week’s sharp losses on hopes U.S. lawmakers will reach a deal to avert $600 billion in tax increases and spending cuts due to start in January – the “fiscal cliff” that threatens to send the U.S. economy back into recession.

“Moody’s news is certainly not positive but market reaction seems contained,” said Hiroshi Maeba, head of FX trading Japan for UBS in Tokyo, adding that trading was getting lighter ahead of the U.S. Thanksgiving holiday weekend.

“Given the recent market rally, the rest of the week is likely to be spent on adjusting positions before the long weekend, with any uptick giving way to profit taking,” he said.

Maeba expects the euro to remain pressured while the dollar will stay underpinned against the yen to hold above 81 yen.

The Bank of Japan ends a two-day policy meeting on Tuesday, and is expected to refrain from taking fresh policy steps.

Euro zone finance ministers are expected to give a tentative go-ahead for the disbursement of 44 billion euros in emergency loans to Greece at a meeting later on Tuesday. The money will only be paid on December 5 if Greece meets all remaining conditions.

The ministers will also discuss how to reduce Greek debt and provide two extra years of external financing to help the country achieve its fiscal targets.

European equities rebounded from multi-month lows on Monday for their biggest daily gain in 10 weeks on signs of progress in U.S. talks to avoid a budget crisis. An unexpected rise in U.S. existing home sales for October also boosted sentiment.

Ratings agency Fitch on Monday warned that failure to reach a deal to resolve the $600 billion “fiscal cliff” of spending cuts and tax increases could trigger a recession and push the U.S. jobless rate above 10 percent.

Fitch said, however, it did not expect Congress to allow the “fiscal cliff” to take place given the “far-reaching effects.” Fitch’s view largely reflected recent market optimism.

But Richard Franulovich, senior currency strategist at Westpac Securities in New York , said in a note that the positive conciliatory rhetoric over the “fiscal cliff” could easily come unstuck, while anything that is produced at the euro zone finance ministers’ meeting is likely to be piecemeal.

“Given our read of the fiscal cliff and Greek risks we remain comfortable fading strength in risk assets,” he said.

The CBOE Volatility index, a gauge for expected volatility in the S&P 500, hit a one-month low on Monday, reflecting receding risk aversion.

The dollar retreated from the two-month high of 81.455 hit on Friday against a basket of key currencies, and helped buoy dollar-denominated commodities.

U.S. crude futures eased 0.4 percent to $88.94 a barrel after rising over $2 the previous day on supply concerns.

Israel bombed dozens more targets in the Gaza Strip on Monday. It said that, while it was prepared to step up its offensive by sending in troops, it preferred a diplomatic solution that would end Palestinian rocket fire. Egypt said a deal for a truce could be close.