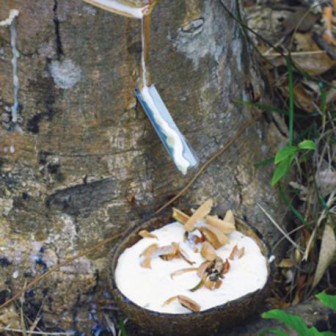 In October, the natural rubber market had spread rumors of import tariffs will be reduced, and eventually let the matter rest. Near the end of the year, the products of some of the country’s tax rate adjustments or put on the agenda, the natural rubber tariff reduction voices increasingly high.

Since mid-October, natural rubber along with the Free Trade Zone to the inventory process, prices fell slightly, especially natural rubber futures price fell continuously since late 10. The hype factor plus bailout expectations, to make the October 25 Shouchu rumors, tariff reduction rumors spread like wildfire, this boost, The main 1301 Hujiao significantly Tiaokonggaokai, single-day gain of 2.58%, spot traders The offer is also a slight increase. Although rumors eventually dropped, natural rubber speculation is evident, but also showing quite obvious, purchasing and storage and to promote favorable tariff reduction for natural rubber.Domestic rubber processing diversification as well as a higher degree of dependence on imported glue, to further reduce the cost of imports market fervently hope.

In terms of history, had 20% of the natural rubber import tariffs is not without reason, it is very necessary because the international natural rubber oversupply and lower prices, the state in order to protect the interests of the majority of the domestic rubber farmers to develop higher import tariffs . Today, natural rubber t price in more than 20,000 yuan, the development trend is also gradually increase, and the unprecedented development of the domestic car market, a substantial increase in demand for tires, and then to maintain high tariffs have been a departure from the market requirements.

According to the authorities, China’s natural rubber imports in the form and proportion is roughly: 10% of the general trade, processing trade, 70%, 10% of the border trade, the Free Trade Zone in re-exports 10%. Among them, 70% of the processing trade imports natural rubber write-off approach, generally do not pay taxes; pay a 10% import tariff border trade; Free Trade Zone to take a more adhesive form of import tariffs of 8%; truly 20% tariffs on imports of natural rubber accounts for only 10% of the imports. So, the significance of high tariffs to increase the state’s tax is not large. The contrary, high tariffs limit the real demand for natural rubber in the way of processing trade, most of the trading profits flow to the foreign, to some extent, hinder the development of the national industry formed.

China’s natural rubber imports, largely dependent on the number of imports has increased every year, from about 100 million tons in 2001, increased to more than 160 million tons in 2007, and in 2011 reached 210 million tons. At present, the domestic rubber due to the limitations of the many aspects of the natural conditions and planting techniques, production scale and product quality can not be with imported glue at a higher, and the production cost is too high, the price is difficult to import with the same specifications The plastic phase competition. Lower tariffs will allow the general trade imports of natural rubber costs can be reduced, so that domestic natural rubber consumers really benefit.

Therefore, natural rubber import tariffs, such as to reduce downstream demand dragged down by high inventory gum City will be a major positive. In the long run, will also promote the development of the domestic natural rubber industry and downstream tire industry upgrading.