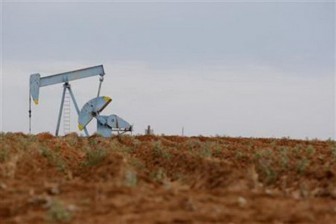 LONDON (Reuters) – Oil slipped towards $111 a barrel on Tuesday as ample supplies outweighed worries over fighting between Israel and Palestinians in the Middle East.

Concern over the well-being of Europe’s economy also pressured oil and other commodities after ratings agency Moody’s stripped France of its prized triple-A badge due to an uncertain fiscal and economic outlook.

“Oil had a good run up yesterday on events in the Middle East and it’s pulling back a bit now in the light of bearish factors,” said Christopher Bellew, a broker at Jefferies Bache. “The market is well supplied.”

Investors are waiting to see if fighting subsides as world pressure intensified for a ceasefire in the Gaza strip. U.S. Secretary of State Hillary Clinton headed to the region with a message that escalation of the week-long conflict was in nobody’s interest.

Some 110 Palestinians have died in a week of fighting, the majority of them civilians, including 27 children. Three Israelis died last week.

Jefferies Bache analysts estimate oil has a $2.50 to $3 per barrel premium due to the Israel-Gaza conflict.

“As far as the geopolitical issue is concerned, we feel that odds tilt in favour of some type of ceasefire or truce that could quickly force as much as $1-$.50 of security premium out of the market,” they said in a research note.

Oil’s downside was checked by promising data from the United States, the world’s top oil consumer.

U.S. home resales rose in October and a gauge of homebuilder sentiment climbed to a six-year high in November, signs of surprising vigour in the country’s still-struggling housing market.

Traders are now eyeing U.S. oil inventory data. A Reuters poll of analysts showed U.S. crude oil stockpiles were expected to have risen by 900,000 barrels in the week to November 16.(additional reporting by Jessica Jaganathan in Singapore; editing by Keiron Henderson)