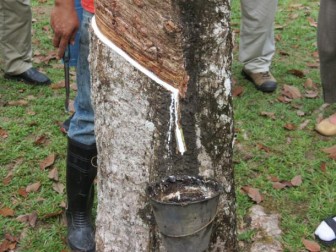 TOKYO: TOCOM rubber futures witnessed a slight down after Bank of Japan kept its monetary policy unchanged on Tuesday. Earlier futures hit a two-week high as Asian share prices rose on hopes of a compromise in the U.S. fiscal crisis.

The benchmark contract earlier rose as high as 257.7 yen, the highest for any benchmark since November 2. Its recent gains were helped by a fall in the yen on anticipation of the Bank of Japan’s further monetary easing.

Moody’s stripped France of its prized triple-A badge on Monday, cutting the sovereign credit rating on Europe’s No. 2 economy by one notch to Aa1 from Aaa, citing an uncertain fiscal outlook and deteriorating economy.

Oil rose 2.5 percent on Monday to its highest price since mid-October, fueled by supply concerns as violence in the Middle East escalated and as investors grew more hopeful that a U.S. budget crisis will be averted.