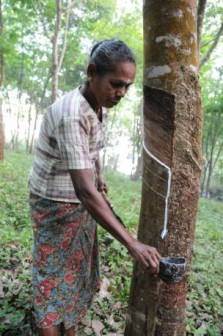 Physical rubber prices finished unchanged on Wednesday. There were no fresh enquiries from any major consuming sector, but the market managed to sustain at the prevailing levels probably as the domestic futures finished higher on the National Multi Commodity Exchange.

Though the market is supposed to be moving in to the peak production season, there has been no improvement in arrivals yet. It is also expected that the growers might prefer to hold the stocks rather than to sell at lower levels even during the season.

Meanwhile, the key TOCOM rubber futures inched up, marking a third day of gains as the Yen hit a seven-month low against the Dollar. But the gains were limited on concerns over the slowdown in global demand.

Sheet rubber closed unchanged at Rs 171 a kg, according to traders. The grade finished steady at Rs 170 a kg at Kottayam and Kochi as reported by the Rubber Board.

India Grain: Maize up in Davanagere on firm demand, flat in Purnea

India Grain: Maize up in Davanagere on firm demand, flat in Purnea