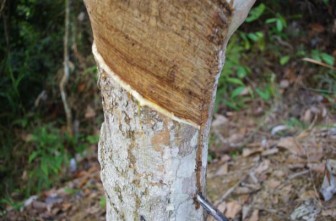 TOKYO, Nov 21 (Reuters) – Key TOCOM rubber futures inched up on Wednesday, marking a third day of gains as the yen hit a seven-month low against the dollar, although gains were limited by concerns over slowing global demand.

* The key Tokyo Commodity Exchange rubber contract for April delivery was traded 0.3 yen, or 0.1 percent, higher at 256.3 yen as of 0051 GMT. The benchmark contract hit a near three-week high of 257.7 yen on Tuesday, helped by a rebound in Japanese equities and a weaker yen.

* Indian natural rubber futures are likely to remain steady this week, tracking some recovery in the world market and as farmers hold back produce on hopes of better prices. However, a pick-up in tapping in the top producing state of Kerala and imports are expected to weigh on prices.

* Wall Street halted its two-day rally on Tuesday, after Federal Reserve Chairman Ben Bernanke said the central bank lacks tools to cushion the U.S. economy from the impact of the “fiscal cliff.”

* The yen slumped to seven-month lows against the dollar On Wednesday and fell nearly as far against the euro on views Japan’s central bank will be pushed into implementing more radical monetary expansion policies.

* Oil fell from a one-month high on Tuesday amid signs of a ceasefire that would end a week of rocket attacks and air strikes between Palestinians and Israelis.

* The Nikkei share average rose to a two-month high in early trade on Wednesday, led by exporters after the yen hit a seven-month low versus the dollar on expectations the Bank of Japan will be pushed to take aggressive stimulus action under a likely new government.

* The following data is expected on Wednesday: (Time in GMT)