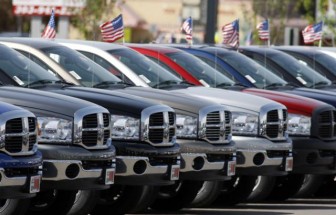 (Reuters) – Canadian vehicle sales this year are on track to reach their highest level in a decade, but the pace of growth will slow over the next two years as demand built up during the recession ebbs, a report by the Conference Board of Canada said on Thursday.

Vehicle sales could reach 1.72 million units this year, an increase of more than 5 percent from last year, the think tank’s report said. But sales growth could slow to 1.2 percent in 2013, given that sales will already be back at pre-recession levels, it added.

“The combination of already-high levels of indebtedness among Canadian households and the inevitable coming hike in interest rates will also cool the auto market,” the report said.

Factors boosting this year’s expected growth are record-low interest rates and the greater availability of popular Honda Motor Co and Toyota Motor Corp vehicles, which were in short supply in 2011 because of disruptions caused by last year’s massive earthquake and tsunami in Japan.

Even as the pace of Canadian sales growth slows, Canadian-based vehicle manufacturers will benefit from growth in vehicle sales in the United States, which are still well below pre-recession levels, the Conference Board said.

Production at Canadian auto manufacturers rose nearly 20 percent in the first eight months of 2012, mostly as output got back to normal at Honda and Toyota.

Production has risen a more tepid 3 percent at the Canadian plants of the Detroit Three this year.

The board expects Canadian auto production to expand at a “still healthy” real pace of 8.5 percent in 2013, slowing to 4.1 percent in 2014 as GM closes one of its plants in Oshawa, Ontario, and U.S. vehicle sales finally return to pre-recession levels.