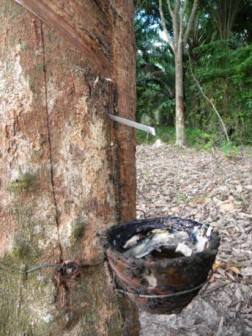 Thailand to Step Up Rubber-Purchase Program as Prices Advance

Thailand, the world’s biggest rubber producer, will expand a state-buying program by more than doubling purchases from farmers to support higher prices, according to Deputy Farm Minister Yuttapong Charasathien.

The Southeast Asian nation will purchase a further 250,000 metric tons by March after buying 170,000 tons since May, Yuttapong said in an interview in Bangkok yesterday. The country will also proceed with plans agreed with Indonesia and Malaysia in August to cut its shipments by 150,000 tons, he said.

Rubber in Tokyo has entered a bull market, rebounding from a near three-year low in August, after the three countries agreed to cut exports by a combined 300,000 tons. The rally, also driven by prospects for increased demand as China and the U.S. recover, may raise farmers’ incomes, while lifting costs for tiremakers such as Tokyo-based Bridgestone Corp. (5108)

“We will seriously move forward,” said Yuttapong, who has overseen Thailand’s rubber policy since Nov. 5. “We will focus on managing supplies to boost prices,” he said, without giving a target.

Futures rose 24 percent from the year’s lowest close on Aug. 14 to yesterday, exceeding the 20 percent gain commonly seen as defining a bull market. The April-delivery contract traded at 258.7 yen a kilogram ($3,136 a ton) on the Tokyo Commodity Exchange at 9:58 a.m. local time, advancing for a fourth day.

The total of 420,000 tons that Thailand may now buy from growers equals 12 percent of last year’s output, according to Bloomberg calculations based on figures from the Association of Natural Rubber Producing Countries. Thai production was 3.57 million tons in 2011, and 2.1 million tons in the first eight months of this year, according to data from the ANRPC.

“Prices have been on an upward trend,” Yuttapong said. The gains have been driven by the export-cut measures as well as increased optimism that growth in China and the U.S. will continue, improving rubber demand, he said.

The top exporters, including ministers, senior officials and representatives from exporters’ associations, will meet in Thailand next month to discuss measures to bolster prices, Yuttapong said. These include plans to form a regional futures market and discuss the so-called appropriate rubber price that allows farmers to make a living and promotes usage, he said.

In the longer term, Thailand will seek to boost domestic demand, encouraging overseas tiremakers to set up local facilities, he said. The government will focus more on prices and demand than planting expansion, Yuttapong said.

India Sugar: Up in Muzaffarnagar as demand rises, down in Maharashtra

India Sugar: Up in Muzaffarnagar as demand rises, down in Maharashtra