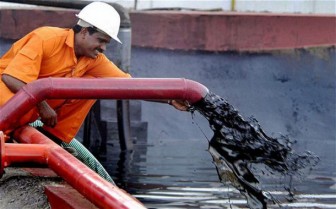 * Eurogroup due to try to hammer out deal later on Monday

SINGAPORE, Nov 26 (Reuters) – Brent crude held above $111 a barrel on Monday as hopes Greece can avoid a near-term bankruptcy brightened the outlook for oil demand from Europe, while violent protests in Egypt reignited supply concerns.

The Eurogroup is due to try to hammer out a deal later in the day to get international lenders to release emergency aid to Greece before its next debt repayments.

Germany Chancellor Angela Merkel said she was confident a deal could be reached, while the French finance minister said an agreement was close.

“Markets could be a little bit cautious today on macro related political events happening this week. On Greece debt deal, depending on the outcome, oil (prices) could go either way,” said Natalie Rampono, a commodity strategist at ANZ.

“Investors are still uncertain of the situation in the Gaza Strip … The main driver for oil prices the next few weeks, though, will be the U.S. fiscal cliff and whether markets will pre-empt positive or negative results.”

The White House and Congress are set to resume negotiations this week to avoid a series of automatic tax hikes and spending cuts worth $600 billion set for January, which investors fear could tip the world’s biggest oil consumer into recession.

Lawmakers in both the Democratic and Republican parties have been trying to convince the public – and financial markets – that they are willing to compromise and can reach a deal before the end of the year.

“After last week’s solid gains, equity markets are getting to a level where investors will need tangible evidence of good outcomes on Greece, the fiscal cliff and economic growth to push prices higher,” said Ric Spooner, chief market analyst at CMC Markets in a note on Monday.

In Egypt, more than 500 people have been injured in protests sparked by President Mohamed Mursi’s decision to grant himself sweeping new powers, supporting oil prices which had eased last week with the Israel-Gaza truce.

Egypt’s stock market plunged on Sunday in its first day open since Mursi issued a decree late on Thursday temporarily widening his powers and shielding his decisions from judicial review, drawing accusations he was behaving like a new dictator.

Mursi will meet senior judges on Monday to try to ease the crisis. Egypt’s highest judicial authority hinted at compromise to avert a further escalation, though Mursi’s opponents want nothing less than the complete cancellation of a decree they see as a danger to democracy.

Apart from hopes for a Greek deal later in the day, oil prices also drew support from promising German data.

However, a regional Spanish election which favoured the separatists parties raised concerns about the negative impact to the Spanish economy and its fiscal conditions, and in turn, oil demand.

Catalonia accounts for 20 percent of the economy and provides the most tax revenue to the central government.

Catalan President Artur Mas, who has implemented unpopular spending cuts in an economic crisis, had called an early election to test support for his new drive for independence for Catalonia, a wealthy region in northeastern Spain.

Voters handed almost two thirds of the 135-seat local parliament to four different Catalan separatist parties that all want to hold a referendum on secession from Spain.

Oil prices were also supported after U.S. equity markets got a boost from hopes for strong consumer buying on “Black Friday”, the start of the holiday shopping season. (Editing by Himani Sarkar)