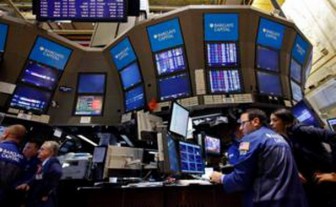 LONDON (Reuters) – European shares edged lower while the euro hovered near a one-month peak against the dollar on Monday as investors awaited the outcome of talks to provide emergency loans to Greece.

Euro zone finance ministers and the International Monetary Fund meet later to try to unfreeze the second bailout package for Greece, but first need to agree how to cut the country’s massive debt pile to a more sustainable level.

“There is optimism around in regards to the euro area’s ability to achieve a deal on Greece,” said Emma Lawson, senior currency strategist at the National Australia Bank.

But a weekend vote in the Spanish region of Catalan, which favoured parties who wanted a referendum on independence, and massive anti-austerity protests in Italy, were limiting market moves.

The euro was steady against the dollar at $1.2975 near a four-week high of $1.2991. Against the Japanese currency, the single currency hit a seven-month high above 107 yen in Asian trade before settling to be 106.50 yen.

In the equity markets, Europe’s FTSE Eurofirst 300 index of top shares followed five-days of gains last week, made on expectations that a Greek agreement will be reached, by opening down 0.2 percent to 1,107.93 points.

Earlier MSCI’s broadest index of Asia-Pacific shares outside Japan closed up 0.2 percent at a two-week high.

Gold fell $3.35 an ounce to $1,749.04 as investors turned their attention to the resumption of talks in Washington this week to try to avoid a series of automatic tax hikes and spending cuts worth $600 billion set for January.

The sudden implementation of the fiscal measures could tip the economy back into recession and, while the uncertainty would normally favour gold, investors have become cautious after the precious metal’s strong gains this year.

Brent crude held above $111 a barrel with the violent protests in Egypt acting to underpin supply concerns and offset hopes for a deal on Greece. Brent crude oil was 0.2 percent lower to $111.25 while U.S. crude just 4 cents lower at $87.24 a barrel.