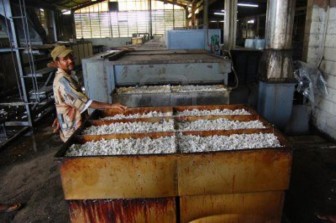 Rubber inventories in key Shanghai warehouses rose by more than a third from a week ago to reach their highest in 2-1/2 years on Friday (Nov 23), as sluggish demand from end-users swelled stockpiles.

Hit by cheap imports as well as slackened demand from manufacturers, domestic rubber stocks at warehouses monitored by the Shanghai Futures Exchange have been climbing steadily since August. Stocks jumped 35.5 percent from a week ago to 90,325 tonnes this week.

“The stocks have been rising for a while, as downstream demand remains sluggish. The fundamentals are just bearish,” said Song Chao, an analyst with Zheshang Futures.

Prices in Shanghai have plunged more than 40 percent from this year’s peak of 43,310 yuan in February. China’s once sizzling auto market has been under pressure this year from a slowing economy and rising fuel costs, stifling demand for rubber used to make tyres.

Manufacturers have also turned to cheaper imports to meet their needs. Imports in the first 10 months of the year have risen about six percent from a year ago to stand at 1.75 million tonnes.

In a bid to help local farmers, China this month kicked off its first rubber stockpiling since 2009 with plans to buy 200,000 tonnes of natural rubber for state reserves.

Changes in rubber stocks reported are as follows: