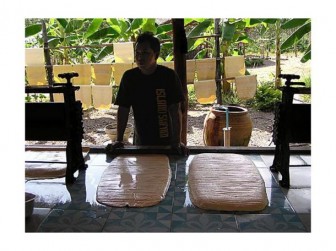 TOKYO, Nov 26 (Reuters) – Key TOCOM rubber futures inched lower on Monday as concerns over higher inventories in Shanghai weighed on the market after the yen’s slide and higher shares steadily raised prices in the past two weeks.

“The market didn’t move much despite worrying signs of higher inventories in Shanghai. The trading is lacklustre and we expect the market to remain calm in the rest of the week,” said Toshitaka Tazawa, an analyst at trading house Fujitomi Co, adding investors’ eyes are on gold and other risk assets that have attracted more speculative investors.

The key Tokyo Commodity Exchange rubber contract for April delivery settled down 1.9 yen, or 0.8 percent, at 259.8 yen. The benchmark contract fell as low as 258.5 yen.

TOCOM said the front-month November contract expired at 249 yen, with 149 deliveries, up from 67 in the October contract.

The new benchmark May contract will debut on Tuesday.

The most active Shanghai rubber contract for May delivery <0#SNR:> fell 1 percent to close at 24,230 yuan per tonne.

Rubber inventories in key Shanghai warehouses rose by more than a third from a week ago to reach their highest in 2-1/2 years on Friday, as sluggish demand from end-users swelled stockpiles.

The front-month January rubber contract on the SICOM in Singapore was last traded at 280.5 U.S. cents per kg, down 0.5 percent.

Brent crude held above $111 a barrel on Monday as hopes Greece can avoid a near-term bankruptcy brightened the outlook for oil demand from Europe, while violent protests in Egypt reignited supply concerns.

Japan’s Nikkei share average edged up to a 7-month closing high on Monday, led by exporters on expectations that a weaker yen will boost earnings.