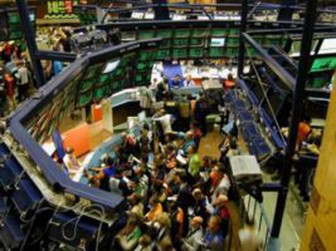 NEW YORK (Reuters) – Wall Street slipped on Monday, pulling back from last week’s gains, as retailers fell on concerns about heavy discounts at the start of the U.S. holiday shopping season and the overhang of the “fiscal cliff” kept investors wary of making big bets.

The Nasdaq outperformed to close higher, led by gains in eBay and as Apple continued its bounce back.

The Standard & Poor’s 500 cut most of its losses during the session and managed to stay above the psychologically important 1,400 level. It also remained above the 200-day moving average, maintaining its long-term uptrend.

The S&P 500 consumer discretionary index (.GSPD) fell 0.5 percent after the start of the holiday shopping season over the four-day Thanksgiving weekend. Target, one of the largest retailers by market value, fell 2.6 percent.

“The concern is big retailers are discounting so much, sales look better, but at what cost?” said Angel Mata, managing director of listed equity trading at Stifel Nicolaus Capital Markets in Baltimore.

Bucking the retail trend, shares of eBay closed at their highest in almost eight years, rising 4.9 percent to $51.40, as the online marketplace notched strong sales on “Cyber Monday.” Amazon gained 1.6 percent to $243.62.

The White House threw cold water on a proposal of avoiding the looming “fiscal cliff” of spending cuts and tax highs by limiting tax deductions and loopholes, instead of allowing tax rates to rise for the richest Americans.

Investors are hoping for advances in talks over the $600 billion in spending cuts and tax hikes scheduled to begin next year, which threaten to drag the U.S. economy back into recession.

Indications of progress in talks, or just political willingness to negotiate, contributed to the market’s recent rally. Major indexes last week gained 3 to 4 percent, with the Dow above 13,000 and the S&P above 1,400 for the first time since November 6.

Those gains represented a turnaround from recent losses founded on worries about Washington’s ability to solve budgetary problems.

About 5.2 billion shares changed hands on the New York Stock Exchange, the Nasdaq and NYSE MKT, below the daily average so far this year of about 6.49 billion shares.

On the NYSE, roughly 13 issues fell for every 10 that rose, and on Nasdaq nearly six rose for every five that fell.

In the other major worry for the market, euro zone finance ministers and the International Monetary Fund made their third attempt in as many weeks to agree on releasing emergency aid for Greece, with policymakers saying a write-down of Greek debt is off the table for now.

“There’s no catalyst to continue the rally we saw last week, though Greece would have been important if we weren’t dealing with the fiscal cliff,” Stifel Nicolaus’ Mata said.

Shares of Knight Capital Group Inc jumped 13.3 percent to $2.82 following reports that rivals might be preparing to bid for part or all of the trading firm.

Apple Inc has asked a federal court to add six more products to its patent infringement lawsuit against Samsung Electronics <005930.KS>, including the Samsung Galaxy Note II, in the latest move in an ongoing legal war between the two companies. Apple shares were up 3.2 percent at $589.53.