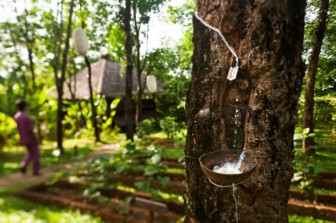 “China has grown from being the 33rd largest export market for Malaysian rubber products in 1997, with an export value of only 36 million yuan (about RM13.7 million) to being the sixth largest in 2011,” said Minister of Plantation Industries and Commodities, Tan Sri Bernard Dompok.

Currently, Malaysia is the world’s largest exporter of rubber gloves, condoms and rubber catheters. The major extablished markets are the United States and the European Union (EU).

Malaysia is also the world’s biggest rubber glove maker with a 60 per cent share of the world market.

“China today is the world’s third largest medical device market, and is expected to be the second largest within five years.

“Malaysia would like to continue to be an active partner in the development of the healthcare market in China,” he added.

In another development, the Malaysian Rubber Export Promotion Council (MREPC) today signed a memorandum of arrangement (MoA) with the China-Asean Business Council (CABC), to enhance trade in rubber and rubber products between both countries.

The Chief Executive Officer of MREPC, Datuk Teo Suat Cheng inked the MoA on behalf of the organisation, while the CABC was represented by its Executive Secretary Genaral, Xu Ningning.

“We hope that business and collaboration between Malaysia and China will improve further.

“We would like to tell the Chinese government and business partners, that we are very interested in doing more business with China in whichever area,” Teo told a press conference after the signing ceremony.

The seminar is the second to be held in China since 2007. It aims to ensure that hospitals and healthcare establishments pay greater attention to hygiene and the safety of both patients and healthcare workers.

The one-day seminar attracted about 102 attendees, including 35 distibutors, 67 doctors and nurses.