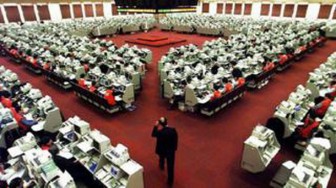 NEW YORK (Reuters) – The euro and U.S. stocks dropped on Tuesday as concern over the threat to the world economy posed by the U.S. “fiscal cliff” offset optimism from a deal to ease Greece’s debt burden, though European and Asian stocks gained on initial investor optimism.

The downdraft in U.S. stocks was in contrast to moves higher on other stock markets around the world, while safe-haven German bonds fell after global lenders reached a new deal to reduce Greece’s debt and release loans needed to keep the country afloat.

But as Democrats and Republicans prepared to resume budget negotiations in Washington, investors re-evaluated risk.

Senate Majority Leader Harry Reid said on Tuesday that he is disappointed there has been “little progress” among Democratic and Republican lawmakers as they try to reach a deal to avoid the year-end “fiscal cliff.

President Barack Obama will launch a multipronged push this week to garner support for his proposals on avoiding sharp tax increases and spending cuts that will otherwise take effect at the beginning of 2013 and could hurt economic growth.

Positive U.S. economic data failed to allay concerns. A gauge of planned U.S. business spending increased by the most in five months in October. But a fourth straight month of declines in shipments underscored the damage inflicted by fears of tighter fiscal policy next year.

“Now that Greece is out of the picture for the moment, the U.S. fiscal slope is front and center,” said Christopher Vecchio, currency analyst at DailyFX in New York.

Michael Hintze, founder and CEO of hedge fund CQS, told a Reuters summit he expects the euro zone to continue muddling through its troubles. But he added that “the chances of misstepping on the way through are pretty high.”

After 12 hours of talks, international lenders decided on steps to cut Greece’s debt to 124 percent of gross domestic product by 2020 and promised further measures to lower it below 110 percent in 2022.

Following months of jockeying, the deal was broadly expected by markets and clears the way for Greece’s euro zone neighbors and the International Monetary Fund to disburse almost 35 billion euros of aid next month.

But with doubts about Greece’s ability to hit its growth and debt-reduction targets, few analysts expect the latest agreement to be the final chapter in the euro zone’s three-year crisis.

Although stocks waxed and waned during the U.S. session, they ultimately lost ground as investors found little to sustain gains.

“It’s about your money, and it’s about right now,” said Frank Lesh, a futures analyst and broker at FuturePath Trading LLC in Chicago. “At this point, you have to make your moves and

avoid the threat of more taxes.

“Until there is deal, I would expect to see more of those machinations – just in case,” he said.

The MSCI index of global stocks was last down 0.2 percent. European shares on the FTSEurofirst 300 index (.FTEU3) ended up 0.3 percent and MSCI’s broadest index of Asia-Pacific shares outside Japan gained 0.5 percent to a near three-week high.

“(The Greek deal) is not the green light for a sustained rally for risk assets across the board. As we’ve seen before, once the market starts scrutinizing some of the details, some doubts may well arise,” said Michael Leister, a senior rate strategist at Commerzbank in London.

Uneasiness about U.S. and Greek finances was offset by the encouraging data on the U.S. economy.

U.S. consumer confidence rose to a four-and-a-half-year high in November as consumers became more optimistic about the economic outlook, according to a private sector report released on Tuesday.

The Greek agreement boosted copper to a three-week high before it gave up gains, while Brent crude retreated to around $110 a barrel as Greek optimism was countered by worries over the looming U.S. fiscal situation. U.S. crude oil futures fell 0.5 percent to $87.31.