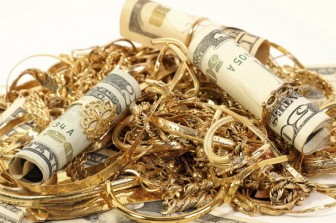 Gold down on US fiscal worries, options in focus

Safe-haven demand for gold faded after euro zone finance ministers and the International Monetary Fund agreed to reduce Greece’s debt, paving the way for the release of aid loans.

Gold prices have gravitated toward $1,750 an ounce due to heavy trading of call and put options around that option strike level, brokers said. COMEX December option expiration is Tuesday after market close.

Fears of $600 billion in automatic cuts in government spending and tax increases early next year have decreased gold’s inflation-hedge appeal. Some worry the tax hikes and spending cuts could tip the U.S. economy into another recession.

Gold investors were cautious as the U.S. Congress crept toward compromise on taxes and spending, but a firm deal to avert the fiscal cliff seemed far off.

Trading volume was more than 50 percent above the 250-day average largely due to a combination of option expiry and contract rollover ahead of first-notice day Friday.

“Rising open interest on a sharply higher price means that this was very real buying rather than short covering,” said Dennis Gartman, a veteran trader and the publisher of the Gartman Letter.

Gold ignored positive U.S. economic news. A gauge of planned U.S. business spending in October rose by the most in five months.