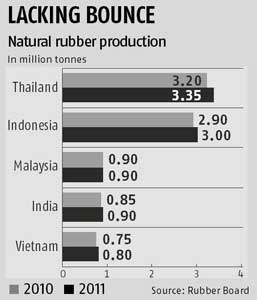 Officials from Thailand, Indonesia and Malaysia are set to meet next month over prices of natural rubber. The meeting, part of efforts to stabilise prices of the commodity, would be held on December 11-12 in Phuket. Though the three countries had earlier met in July and August to restrict exports, this had little impact on the global markets. In the last three to four weeks, prices of natural rubber have seen a steady fall.

Experts feel the market might see turbulent times next year. Some expect a steep fall in rubber prices next year, as global demand is sluggish. “It may not be surprising if the RSS-4 is quoted below Rs 150 a kg in 2013,” said Kochi-based trader N Radhakrishnan.

In August, Thailand, Indonesia and Malaysia had agreed to cut exports by 3,00,000 tonnes to support prices. The Thailand government had reduced quotas for companies, leading to a drop of about 10 per cent, or 25,000 tonnes, a month in exports. The three countries, whose natural rubber production accounts for 70 per cent of global output, had also decided to cut aged trees to scale down production. To stabilise rubber prices at about $2.80 a kg in the short term, they also decided on a minimum support price for rubber.

However, their efforts had no significant impact, as demand in major consumer markets such as China and the European Union was weak. Earlier, Thailand, Indonesia and Malaysia had agreed to implement an agreed export tonnage scheme(AETS) and a supply management scheme (SMS), but had failed to reach a consensus on the pricing mechanism. The AETS, which tightens global supply, has proven to be a mechanism that ensures fair prices. SMS is aimed at rubber production control in plantations in the long term through rejuvenation, farm diversification, increasing domestic consumption and prohibiting new plantation areas.

In 2009, rubber prices fell to a seven-year low of $1.10 a kg. This led to Thailand, Indonesia and Malaysia scrambling to slash exports by 9,15,000 tonnes. The export restriction plan, however, wasn’t strictly enforced, as the market rebounded in mid-2009, primarily due to rising demand from tyre companies in China and India. This year, the situation deteriorated, as global demand fell and prices began to decline.