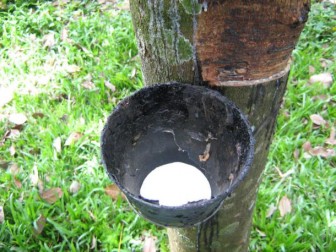 “The move in Thailand made consumers even more wary of sluggish demand now that the Shanghai market is losing momentum both in shares and in rubber,” Toshitaka Tazawa, analyst at trading house Fujitomi Co, said.

Rubber stocks held by Thai government stood at 170,000 tonnes as of Tuesday and are expected to rise substantially over the next few months as the government is about to step up its buying, the deputy agriculture minister said.

The Ministry of Agriculture planned to ask for cabinet approval next week to spend 25 billion baht ($814.60 million) to buy more rubber and rent a private warehouse with capacity to store another 240,000 tonnes, said Chanachai Plengsiriwat, the head of the Rubber Estate Organisation (REO).

The key Tokyo Commodity Exchange rubber contract for May delivery , which debuted on Tuesday, settled at 259.1 yen per kg, after falling to as low as 257.5 yen.

The most active Shanghai rubber contract for May delivery  closed down 1.5 percent at 23,860 yuan per tonne.

The front-month January contract  on the SICOM in Singapore was last traded at 280.5 U.S. cents per kg, down 0.4 percent.

Brent crude rose above $111 per barrel on Tuesday as optimism coursed through financial markets, while Japan’s Nikkei share average nudged up to a seven-month closing high after Greece’s international lenders reached a deal on a new debt target.