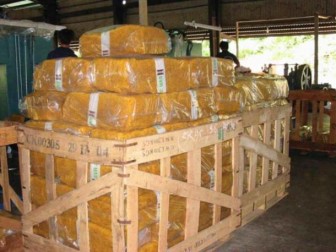 TOKYO, Nov 28 (Reuters) – Key TOCOM rubber futures fell 1.6 percent to a one-week low on Wednesday as investors stayed away from the market, wary of a high level of inventories and weak growth prospects in China, the world’s biggest consumer.

“A delay in tapping in Thailand is causing tight supply, but investors’ eyes are on China,” said Kaname Gokon, general manager at trading house Okato Shoji.

The Shanghai Composite Index slid 0.9 percent to its lowest in nearly four years as growth-sensitive sectors sank, extending losses after closing on Tuesday below 2,000 points for the first time since January 2009.

The key Tokyo Commodity Exchange rubber contract for May delivery <0#2JRU:> settled down 3.7 yen at 255.4 yen per kg. The benchmark contract, which debuted on Tuesday, fell as low as 255 yen, down 1.6 percent, the lowest since Nov. 21.

The most active Shanghai rubber contract for May delivery closed down 0.6 percent at 23,710 yuan per tonne.

The front-month January contract on the SICOM in Singapore was last traded at 278.7 U.S. cents per kg, down 0.9 percent.

The yen soared and the euro moved away from the previous session’s one-month high against the dollar in Asian trade on Wednesday as investors’ relief about a new debt target for Greece turned to unease over the looming U.S. fiscal crisis.

The Nikkei average hit a one-week closing low on the yen’s strength, while Brent oil rose above $110 per barrel after hitting a one-week low in the previous session. (Reporting by Yuko Inoue; Editing by Sunil Nair)