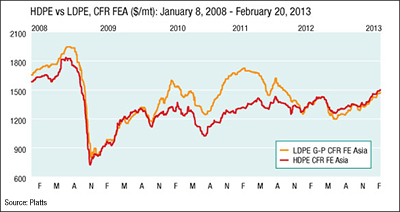 February 20, 2013 – Asia’s polymer market has shrugged off China’s new preferential import duties for polyethylene from some countries, as the minimum price for the tax reduction to kick in is seen as too high and trade flows from these nations are almost negligible.

Effective January 1, 2013, China cut the polyethylene import duty for Least Developed Countries to 3%, from 6.5%, provided the landed prices of low density PE and high density PE from these countries exceed $3,800/mt on a cost-insurance-freight basis.

“It is very rare for HDPE and LDPE to hit such a price level. Maybe there are some specialty grades for medical use which are able to hit $3,800/mt CFR China but it is very rare for commodity grade. In addition, these countries doesn’t export to China. The impact is almost zero,” said a Japanese trader.

Prices of HDPE-film and LDPE have never crossed $3,800/mt CFR Far East Asia since Platts started assessing them in May 2006 and April 1983 respectively.

According to data from China’s General Administration of Customs, the country’s average import price of LDPE in 2012 was $1,430/mt, CIF basis, with imports of 1.57 million mt for the year.

Meanwhile, countries that will be eligible for the preferential import tax rate are almost nearly absent from China’s historical trade data.

Only Sudan was seen as an import source of HDPE for China in 2012, at a total volume of 0.85 mt for the year with imports landed in China in April and June, historical data from China’s customs bureau showed.

According to the United Nation’s definition, a country would be named Least Developed Country if its three-year average gross national income per capita falls below $750, has weak human resources and economic vulnerability. Forty-eight countries fall under this category, with 33 of them in the African continent.

Some countries that fall into the category are Laos, Sudan and Yemen.