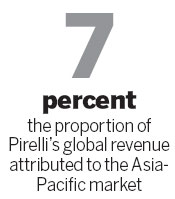 Investment by tire giant to make Shandong facility its largest

Gregorio Borgo, CEO of Pirelli Asia Pacific, said that the expansion is necessary to keep pace with the huge potential market for its tires coming from China’s surging demand for luxury and sports-utility vehicles.

“By 2014, our manufacturing base in Yanzhou, Shandong province, the only one in Asia-Pacific, will become the biggest in the world for Pirelli,” he said .

Pirelli reported a turnover of 353 million euros ($468.4 million) in Asia Pacific in 2011, and it is expecting a 23 percent year-on-year growth in 2012, helped by rising demand for more expensive vehicles in China.

“The Asia-Pacific market contributes 7 percent of our global turnover, and we are targeting to increase that,” added Borgo.

In 2007, it added a passenger tire production line with a 5 million annual capacity, with its tires exported around the world.

“We hope to double that production capacity of passenger car tires to 10 million by the end of 2014,” said Borgo.

The company’s overall $200 million investment will also include considerable spending on helping the Italian brand expand its dealer network across China.

“We have seen strong consumption growth in second- and third-tier Chinese cities, and so we will increase our distribution coverage beyond first-tier cities and provide more end user access to our products,” said Borgo, adding planned distribution outlets will “be linked with 4S (sales, spare parts, service, survey) car stores” in high-income areas.

Pirelli’s tires are traditionally considered high performance products, normally finding their way onto the wheels of some of the world’s most desirable marques such as Aston Martin, Bentley, Ferrari, Lamborghini, Maserati and Porsche.

It currently holds a 20 percent global share of the premium tire sector, putting it in pole position to benefit from China’s booming demand for luxury vehicles and SUVs.

“China’s vehicle market is the most promising, especially for luxury vehicles. Its luxury car industry is expanding rapidly and has become the most important market for high-end auto brands,” said Borgo.

“China’s automobile market has grown tremendously, especially in the luxury car segment. This market will continue to increase, as will the premium tires market,” said Borgo.

He said that his confidence in the market also comes from the fact that more luxury cars are being made locally.

Statistics show that its total tire production in 2012 is expected to reach 483 million units, a growth of between 5 and 7 percent on 2011, accounting for almost a third of global output.

Xiang Hanxue, a tire industry analyst with research firm Forward Business and Intelligence Co, predicted China will reinforce its leadership in the sector by yielding more than 550 million units of tires by 2015.