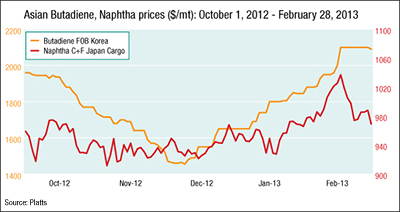 This follows the startup of new synthetic rubber plants in 2012 that resulted in China’s butadiene imports for the year soaring almost 47% year on year to 344,825 mt, data published late January by the China Customs Statistics Information Center showed.

One of those new plants was started up by German specialty chemicals maker Lanxess — a 30,000 mt/year joint-venture nitrile butadiene rubber plant at Nantong — on May 23.

Recent butadiene price hikes have also been supported by lower production in South Korea due to a change in feedstock composition and technical woes.

Lotte Chemical began using 10% LPG as feedstock for its steam cracker at Daesan from February 1 to cope with rising naphtha costs.

The Daesan steam cracker, which can make 1 million mt/year of ethylene and 500,000 mt/year of propylene, supplies crude C4 feedstock to a 150,000 mt/year butadiene extraction unit at the same location.

The change will not affect output of ethylene and propylene but will lower production of butadiene.

Similarly, Yeochun Naphtha Cracking Center plans to use 10% butane as feedstock for its No. 1 and No. 2 naphtha-fed steam crackers at Yeosu to 10% from March 1.

The three supply crude C4 feedstock to a 240,000 mt/year butadiene extraction unit that is due to undergo a month-long turnaround in May.

That unit has been operating at 80% of its capacity since February 8, down from 100% earlier, due to contamination of an extractor caused by polymerization. This equates to the loss of a 1,500 mt butadiene cargo/month.

Also from March 1, Samsung Total will use 10% of butane as feedstock for its naphtha-fed steam cracker at Daesan, which can produce 1 million mt/year of ethylene, 600,000 mt/year of propylene and 114,000 mt/year of butadiene.