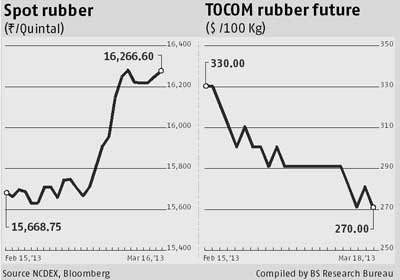 After a gap of nearly three months, the global and domestic natural rubber (NR) markets have set a reverse trend in prices – international markets prices have dipped below those in the domestic market. The benchmark grade, RSS-4, was today quoted at Rs 162 a kg in Kochi, while Bangkok had a price tag of Rs 157 a kg.

Local prices have been on a lower plane till March 8. For the past three months, local prices were lower by Rs 7-12 a kg on average compared to the global markets. Imports had slowed down in January and February, compared to the same months of the last financial year as local prices dipped below global rates.

In February, imports fell to 9,497 tonnes as against 24,519 tonnes in February 2012, according to the latest figures of the Rubber Board. Imports in January were 23,672 tonnes against 28,905 tonnes in the same month last year. According to experts, the domestic market is now facing a serious supply crunch due to extremely hot weather in Kerala. In most plantations, tapping has either been halted or has slowed. This is likely to resume by mid-April. By April, summer showers are expected to hit Kerala, when plantations will begin tapping again. Production has suffered a setback in February as the monthly output fell to 61,000 tonnes, as against 64,000 tonnes last February. During this month, production is likely to decrease by 10,000-14,000, tonnes thanks to the scorching heat. So, the local market is likely to be in a higher orbit, contrary to the global trend.

According to N Radhakrishnan, former president, Cochin Rubber Merchants Association, the government’s proposal to enhance the import duty has enthused farmers, as a rise in duty adversely affects imports. The Union government had decided to increase the duty from Rs 20 a kg to a maximum of Rs 34.2 a kg. The ministry of commerce will soon issue a notification in this regard. Though international prices are below local rates, higher duty might dampen the prospects of more imports into the country. As a result of these two factors, growers now expect a temporary supply crunch. The trend is likely to continue for the next four-five weeks.

The slow growth in production during the past five years is a serious issue. Rubber-based industries, especially tyre companies, opt for the import route as the domestic market does not have enough saleable stocks. In 2006-07, total production was 852,895 tonnes.