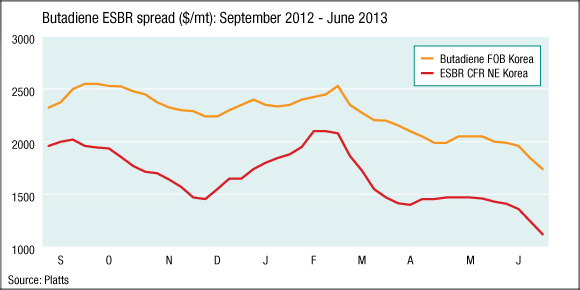 Asian butadiene prices are at a 3-1/2 half year low amid weak demand and a glut of synthetic rubber stocks, Platts data showed.

The weak demand was reflected in statistics from South Korea whose exports of the synthetic rubber feedstock fell 32% month-on-month in May to to 16,458 mt.

Also pressuring prices lower has been thin demand from the US this year. From January to May, South Korea shipped 9,006 mt of butadiene to the US, down 74% on the 2012 period.

Producers and end-users said rubber demand was poor from tire makers, especially in China, resulting in a build-up of overall domestic rubber stocks.

Similarly, on April 22 French tiremaker Michelin posted Q1 net sales of Eur4.88 billion ($6.37 billion), down 8% from the 2012 period, attributing the lower sales to a weak market in the US and poor demand for passenger car and light truck tires in Europe. 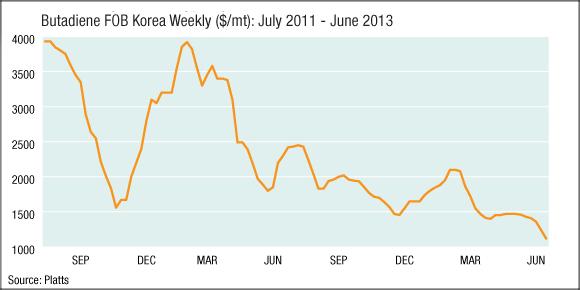 Synthetic rubber stocks accounted for 56,400 mt of the overall stocks, or about 16%, up from 55,600 mt on May 30, which has also dampened spot prices for various synthetic rubber grades.

End-users in China said spot prices for butadiene could fall further as bids hovered about $1,300/mt CFR and lower.