Wednesday as market players liquidated their long positions to avoid uncertainties ahead of a release of the minutes of the July U.S. Federal Reserve meeting on Wednesday.

The above two rubber bellwethers rebounded on Thursday and ended higher on Friday after the minutes suggested that the U.S. Fed was still on track to start tapering its asset-buying program as early as next month, and China reported a preliminary reading of the HSBC purchasing managers’ index which rose from 47.7 in July to 50.1 in August.

On the rubber front, Reuters Newswires on Monday disclosed a drop in rubber stocks in Qingdao to 298,300 tons. The U.S. auto sales in August rose 12.0% from the same period of last year, market analysts J.D. Power& Associates and LMC Automotives said late on Thursday. And Japan’s rubber stockpiles fell to the lowest level of 7,571 tons as of 10 August since 20 January, according to the Rubber Trade Association of Japan on Friday.

As rubber fundamentals have improved consecutively and global investor confidence also has returned on the back of global economic improvement, especially in the Eurozone and China, it’s time for physical rubber markets to climb up again. 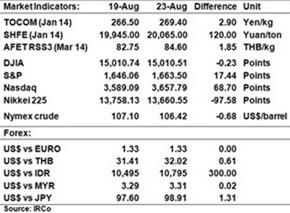