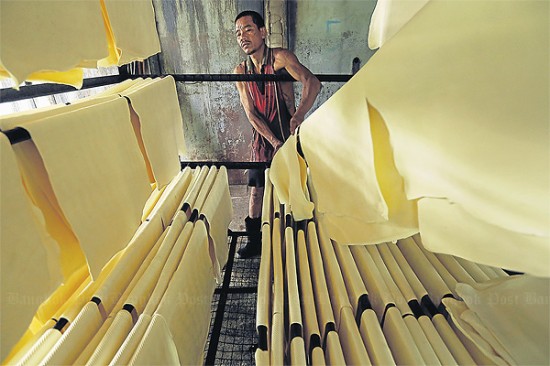 Thailand: Rubber protesters back down

Rubber farmers in the Central Plains, North and Northeast have agreed to call off major road blockades planned for Tuesday after accepting the government’s subsidy offer.

A worker continues to make sheet rubber at a rubber cooperative in Ban Khuan Thia village of Cha-uat district, Nakhon Si Thammarat, where several hundred rubber farmers are holding a week-long protest to demand that the government raise prices for their sector. PATIPAT JANTHONG

Farmers in the South continued to hold out, with protests continuing in Nakhon Si Thammarat yesterday, though industry representatives in the region are due to discuss the government’s offer today.

Santi Ruenphaksap and Sila Panjaree, representing rubber farmers in the northern province of Phitsanulok, and Suwit Maithi, representing Chiang Rai, said they had agreed to abandon plans for a highway blockade in Uttaradit province.

They said they had made the decision after Central Plains rubber farmer representatives agreed on a similar course of action.

The government has offered to raise the raw sheet rubber price to 80 baht per kilogramme and subsidise rubber cultivation at 1,260 baht per rai up to a maximum 10 rai per farmer.

The northern representatives had earlier yesterday vowed to block the Asian Highway at Cham Bon intersection in Uttaradit’s Phichai district after deeming the government’s offer unacceptable.

Rubber farmer representatives in the Northeast were quicker to accept the subsidy offer.

Sitthiporn Thepjantramaneechai, head of a network of rubber farmers in the Northeast, said farmers in the region were divided into two groups. About 30% were satisfied with the government-proposed subsidy, while the rest insisted on pushing for a better deal by going ahead with planned Sept 3 roadblocks, he said.

Chuan Chimklang, who represents rubber farmers in the northeastern province of Nakhon Ratchasima, said most local rubber farmers there were happy with the subsidy offer.

Ubon Ratchathani farmers’ representative Adul Khotephan said growers in his province had agreed to call off their planned road blockade in Sikhiu district.

Farmers in the province had been demanding 92 baht per kilogramme of sheet, but Mr Adul said the offer of 80 baht was acceptable. He said farmers in his province were also supportive of the government’s project to support the construction of smoked rubber factories.

In the South, Songkhla representative Sompong Ratchasuwan said representatives from 14 southern provinces would discuss their stance at a meeting in Krabi today.

A road blockade by rubber farmers remained in place in Nakhon Si Thammarat’s Cha-uat district yesterday, but the number of demonstrators there was dwindling as their protest entered its seventh day.

Farmers there are demanding the government give them 100 baht per kilogramme of raw sheet rubber. About 2,000 police have been deployed nearby.

The representatives met Deputy Prime Minister and Agriculture and Cooperatives Minister Yukol Limlaemthong at Government House on Wednesday to discuss the subsidy offer.

Mr Pracha asked farmers to end their protest in Nakhon Si Thammarat. He said the blockade there had caused major problems for local residents as it had forced school closures and prevented the transfer of seriously ill hospital patients.

It was also affecting other farmers in the region as their goods could not be delivered to market, he said.

However, Pol Gen Pracha insisted that the government would not use force to disperse the demonstrators.

He said many police officers had been injured in a previous clash, and the government wanted to ensure public safety.

The deputy prime minister also claimed politicians were inciting the demonstration in Nakhon Si Thammarat, saying less than 30% of the protesters there were locals.

Mr Yukol, meanwhile, yesterday said the National Rubber Policy Committee would discuss the possibility of increasing the cap on rubber plantation subsidies from 10 to 25 rai at the request of farmers’ representatives.

He also confirmed the government would lend 5 billion baht to rubber farmers so they could produce value-added rubber products instead of selling only raw sheet.

The government would also lend 15 billion baht to large-scale rubber industrialists so they could upgrade their facilities, he said.

Mr Yukol said the government’s offer should calm the situation and he hoped farmers could convince their peers in Nakhon Si Thammarat to end their blockade.

He insisted the government could not set a rubber price because that would affect market mechanisms and, unlike the rice industry, Thailand was not in a position to determine world prices.