The benchmark rubber contract on Tokyo rubber futures trended downward along the week after its rise on Monday and stayed slightly lower on Friday compared with an earlier Friday as market players liquidated their long positions to avoid risks in the wake of a slightly strengthening of the yen against the dollar and market concerns about the geopolitical uncertainties in Syria. These influenced Shanghai rubber futures and other physical rubber markets in Asia to follow suit.

Nonetheless, Thai RSS3 price moved against the falls of rubber futures and physical rubber markets in the region as Thai rubber farmers in southern Thailand protested and blocked streets. That resulted in delayed shipments for some Thai exporters.

It is noticeable that global stock markets mostly trended downward during the week, but crude oil futures stayed rather firm. At the same time, a decline in rubber stocks and inventories in many major producing and consuming countries seem to continue. That means rubber demand has come back, but incoming rubber supply is still a question. 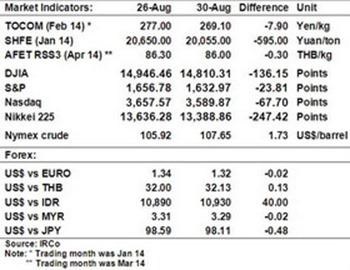