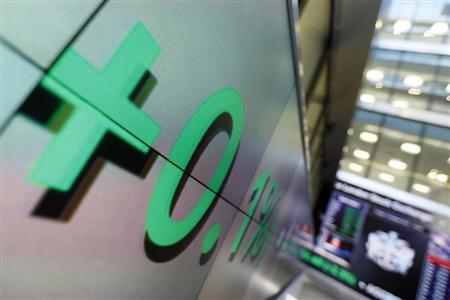 SYDNEY (Reuters) – Asian stocks inched cautiously higher on Monday encouraged by record highs on Wall Street, though anxiety over a credit squeeze in China has weighed on shares there while adding to pressure on emerging market currencies.

There was some relief when China’s benchmark short-term money rate opened sharply lower at 5.57 percent, which was enough to help Shanghai edge up 0.15 percent <.SSEC>.

Sentiment was underpinned by upbeat data on U.S. economic growth and the resilience of stocks to the Federal Reserve’s decision to start scaling back its bond-buying stimulus.

The single currency was only briefly troubled on Friday when Standard & Poor’s cut its supranational long-term rating on the European Union to AA-plus from AAA, citing rising tensions on budget negotiations.

Yields on benchmark 10-year Treasuries were holding at 2.89 percent having risen just 2 basis points last week even as the Fed announced its tapering.

In Asia, all eyes were on China after the country’s central bank sought to allay fears of a cash crunch on Friday, saying it has added $50 billion in three days to the interbank market.

The People’s Bank of China (PBOC) injected more than 300 billion yuan into the interbank market in response to rising rates, but hinted that banks have work to do if they want to avoid a cash crunch.

Worries about the banking system contributed to a 2 percent drop in Shanghai shares on Friday.

The combination of Fed tapering and tighter China interest rates could weigh on emerging market currencies and assets, as it did back in June.

Currencies from Indonesia to Malaysia and Thailand all came under pressure last week and even the Korean won lost a little of its strength.

Still, analysts at Deutsche argued that emerging markets (EM) Asia could weather any outflow of capital.

“Asia remains best placed — the reform effort in China and India is significant; and the smaller, more open economies will benefit disproportionately from strengthening demand in the U.S. and Europe,” said Drausio Giacomelli in a note to clients.

“The value of EM as a diversifier will increase once uncertainty about the future of U.S. monetary policy eases into 2014,” he added, noting that emerging markets were just a fraction of the global portfolio at around 3 percent or lower.

In commodity markets, gold has been getting less precious by the day due to the winding back of U.S. stimulus and a general lack of global inflationary pressure.

In contrast, oil prices have been supported by a positive outlook for fuel demand in the United States and reduced Libyan supply. Brent crude was up 7 cents on Monday at $111.84 a barrel, on top of gains of almost 3 percent last week.