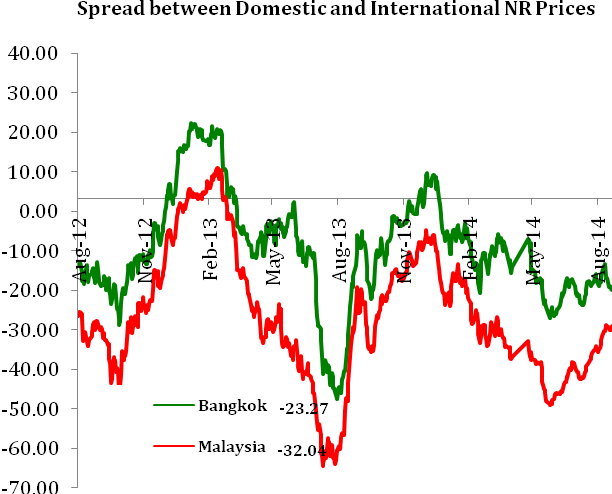 ⊳ Sharp declines are being witnessed in the overseas natural rubber market as the week’s session commences. SHFE rubber futures tumbled five per cent while TOCOM and AFET rubber futures shed about three per cent on Monday on concerns over economic growth in the top consumer China. The recent set of economic indicators from China has been lacklustre that fanned worries over demand puncturing overall market sentiments that have been in doldrums on supply glut.

⊳ Volatile moves were witnessed in the Indian natural rubber market last week. Following the decline towards five year low, a bounce back was witnessed. Tight supplies amidst moderate gains in the overseas market bolstered the sentiments though subdued demand capped gains.

⊳ According to Thailand’s Office of Agricultural Economics NR production in Thailand is likely to rise to 4.58 million tonnes from 4.38 million tonnes as tapping area increased in the country’s north and north-eastern provinces.

⊳ India’s NR production in August declined 26% to 51000 tonnes on YoY basis while consumption registered a rise of 4.2% to 85000 tonnes. Imports declined as well to 42499 tonnes compared to 43221 tonnes imported during the same period last year.

As long as 12250 caps upside, selling pressure is likely to persist and slippage past 11800 with considerable volume may again intensify weakness with increased possibility of prices revisiting the recent lows or more.