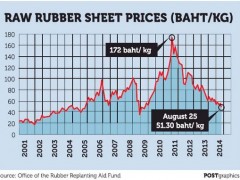 With declining rubber prices, what will rubber farmers do in Thailand?

Last year, rubber farmers were unhappy with the Yingluck government. AP on September 4, 2013:

Farmers from several provinces in the south, where most of Thailand’s rubber plantations are located, were blocking a main highway near an agricultural cooperative office in Surat Thani province, 640 kilometers (400 miles) south of Bangkok, police Maj. Gen. Kiattipong Khaosam-ang said.

Protesters upped the ante though as AP reported on September 6, 2013:

A protest by Thai rubber farmers demanding subsidies turned violent Thursday, with police in a southern province saying a group of demonstrators threw bricks and bottles containing an acidic liquid at them.

Rubber farmers have been blocking roads in several southern provinces to press their demands for compensation as the world market price for rubber has tumbled.

Police Col. Narong Supa-aim said about 50 mostly young protesters out of a group of about 250 blocking a road in Prachuap Khirikhan province attacked his men Thursday evening. He said 10 police including the provincial police chief were slightly injured, and 10 protest leaders were detained but not charged.

The government established a Cabinet-level team on Thursday to negotiate with the protest leaders, with an initial meeting scheduled for Friday.

There were also scattered scuffles at bigger protest sites in Surat Thani and Nakhon Si Thammarat provinces. But tensions seemed to have eased from the previous few days as the government indicated more willingness to negotiate.

There had been fears that the protesters would try to block provincial airports, some of which serve key tourist destinations. Rail services have resumed after protesters earlier blocked train tracks.

The government has offered to subsidize the farmers with cash payments pegged to the size of their plantations, while the farmers are demanding that they be paid a guaranteed price for their product.

The Cabinet, during its meeting on 10 September 2013, approved a project to solve the rubber problems occurring through the whole system in 2014.

At the same meeting, it approved a fund of 21.2 billion baht to ease the rubber price problem in the short term.

In easing the rubber price problem in the short term, under the project to solve the rubber problems in the whole system in 2014, the Cabinet approved the proposal by the Natural Rubber Policy Committee to increase the subsidy for rubber farmers from 1,260 baht to 2,520 baht per rai (0.4 acres), with a limit of 25 rai (10 acres) of rubber plantation per farmer. The subsidy will be offered for a period of seven months, from September 2013 to March 2014.

The “cess,” or tax charged on rubber exports, has been scrapped for four months, from 2 September to 31 December 2013. The decision to scrap the cess is intended to enhance Thailand’s competitiveness in the global rubber market.

BP: With the market price (around 70 baht a kg back then in 2013) and the subsidies, the farmers got between 80 to 90 Baht a kg. While the protests continued and even got more violent, enough farmers accepted it and with the remaining farmers losing goodwill after the violence, they essentially ended the protest.

However, we have had a coup, and the rubber price has continued to decline per the below graphic from the Bangkok Post from August 27:

Thai rubber farmers who supported anti-government protests that led to a military coup in May say they feel betrayed because the ruling military is failing to help soften the blow of plunging rubber prices.

THAILAND is the world’s largest rubber producer and exporter, but falling prices and a decision by the military not to extend subsidies risks alienating rubber farmers, most of whom are in the south.

Rubber farmer Somkid Unping joined demonstrations that began late last year, backed by the royalist establishment and aimed at bringing down the populist government of then Prime Minister Yingluck Shinawatra.

The junta has tried to step back from a culture of subsidies across the agricultural sector although junta leader General Prayuth Chan-ocha, who became prime minister on Monday, has said the government would offer some help, including soft loans for producers to buy fertilizer.

But disgruntled farmers say that is not enough.

More than 10,000 rubber farmers in Thailand, based mostly in the south, are preparing to launch protests against the government and demand it announce measures to help them counter a slump in prices to five-year lows, farmers’ leaders said on Wednesday.

These protest moves would involve farmers disrupting work at rubber factories in southern Thailand and marching to the capital Bangkok to submit a letter to the agriculture minister, they said.

“More than 10,000 (rubber) farmers will come for the protests,” Perk Lertwangpong, chairman of the Rubber Cooperative of Thailand grouping, told Reuters.

A government panel agreed Friday to expedite subsidy payments to rubber farmers in exchange for them dropping planned street protests while policymakers work to reform the industry.

The Natural Rubber Policy Committee, chaired by Prime Minister Gen Prayut Chan-o-cha, said it would work to get 3 billion baht in subsidies into the hands of farmers who have had trouble providing proper documentation to get the government hand-outs. The subsides constitute the last 10% of a 30 billion baht package approved earlier to aid farmers, who have been hit hard by tumbling rubber prices.

In addition to payments of 2,520 baht per rai, farmers also will get access to five billion baht in loans being made available to two dozen cooperatives by the Bank for Agriculture and Agricultural Cooperatives to support rubber processing.

However, Friday’s announcement made little impression on prices and farmers said they were not happy, leaving open the prospect of protests to try to force the government to do more to help them.

Despite the Thai announcement, Shanghai rubber futures traded more than 3 percent lower on Friday due to poor demand for commodities in China. Tokyo rubber futures for February delivery were down 0.1 yen at 189.1 yen per kg by 0651 GMT, near a five-year low.

The price of Thai unsmoked rubber sheet (USS3), which farmers sell to factories,was quoted at 48 baht per kg, which farmers say is far below their production costs of 65 baht.

“This measure is worth nothing and we will still suffer losses. Farmers’ groups will meet again early next month to see what more we can do to put pressure on the government to do something,” said Amnuay Yutitham, one of the leaders of farmers who threatened this month to stage protests due to low prices.

“We have suffered with falling prices and lower income for so many years without much help,” Perk Lertwangpong, head of the Rubber Holders Cooperatives Federation of Thailand, said by phone from Chanthaburi province, 245 kilometers (152 miles) southeast of Bangkok. “With prices at this level, we aren’t afraid of martial law. We’ll gather to fight.”

Output from the country may drop as much as 30 percent because of falling prices, fewer tapping days, labor shortages and heavy rains disrupting plantation work, said Perk, adding that farmers will meet on Oct. 8 to discuss the planned protest.

Provincial officials have been assigned to hold talks with farmers, and will urge them not to stage a protest in Bangkok, government spokesman Yongyuth Mayalarp said yesterday.

BP: It is hard to imagine the junta will allow them to protest. The Cabinet yesterday approved15 billion Baht for rubber farmers (there are other aid programs for farmers although the early details are not yet clear). So what will the rubber farmers do?