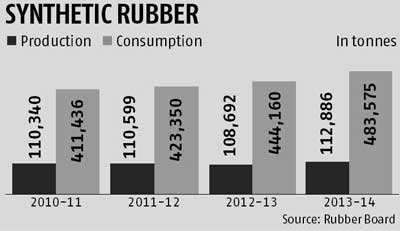 A rise in the prices of natural rubber has prompted tyre manufacturers to consider replacing the commodity with synthetic products.

Subba Rao Amarthaluru, chief financial officer of CEAT and RPG Group, said, “Some countries are looking at controlling the supply of natural rubber in the hope of a rise in prices. Indonesia and Thailand are among them. Indian rubber prices are hovering at about Rs 125/kg. We are expecting the price to rise because the supply has been cut 10 per cent.”

Currently, styrene butadiene rubber is being traded at $1,850 a tonne, against $1,650 a tonne in the case of ribbed smoked sheet, a raw material for rubber. Prices of these commodities have moved in tandem with the price of crude oil. According to a recent study, raw material costs account for 65-70 of the tyre sector’s turnover. As raw materials, tyre manufacturers primarily use natural rubber, synthetic rubber, carbon black and rubber chemical.

In 2012-13, the tyre sector accounted for Rs 35,000 crore of the rubber sector’s overall turnover of Rs 60,000 crore. B K Bansal, senior vice-president (finance) of Balkrishna Tyres, however, says he doesn’t favour replacing natural rubber with synthetic rubber. “The replacement comes at the cost of quality, which most reputed companies will not like,” he said.

Sources said in September, the shortage of natural rubber stood at 25,500 tonnes, with India importing 41,848 tonnes. During the April-September 2014, imports have risen 24 per cent to 225,625 tonnes compared to the year-ago period.