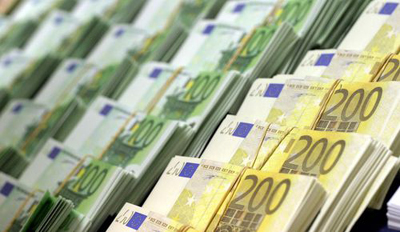 LONDON: The euro gained on Tuesday as the dollar laid low before a two-day meeting of the U.S. Federal Reserve where the central bank may edge closer to its first interest rate rise in almost a decade.

Solid gains for Asian markets overnight failed to transfer to Europe where the recent rally in euro zone shares and bonds stalled as the euro notched its first two-day run of gains in three weeks, a disadvantage for the bloc’s exporters.

Wall Street was expected to give back around 0.3 percent of Monday’s 1.3 percent jump when it resumes, while oil

and other commodity markets also remained under heavy pressure from a global supply glut.

Fed policymakers will kick off their two-day meeting later, and many analysts expected them to remove the “patient” reference to rate rises from their policy statement. That would put them a step closer to their first hike since 2006.

Economists polled by Reuters are almost evenly split on whether a rate increase will come in June or later in the year. But more downbeat housing data on Tuesday added to lacklustre U.S. manufacturing and other housing figures on Monday that had fuelled talk that the Fed would remain cautious.

“U.S. data has remained on the weak side, despite tightness in the labour market. This allows the FOMC (Fed) to remove the patience language and remain dovish in the statement tomorrow,” said Nick Lawson, a managing director at Deutsche Bank.

“That so much discussion around the economy is still warranted whilst equity price performance marches on toward imperious new highs is clear evidence that assets are out- performing underlying economics.”

The dollar meanwhile was down against a basket of major currencies as it added to its biggest drop in more than a month on Monday. Benchmark 2- and 10- year U.S. government bond yields also made it six days of declines in the last seven.

Britain’s FTSE 100 was the only major index in Europe in positive territory in early afternoon European trading. Wariness over the Fed offset the effects of the bond-buying programme the European Central Bank began last week.

London was up a meagre 0.1 percent, but Frankfurt’s Dax dropped 1.2 percent and Paris’s CAC 40 lost 0.8 percent. Italian and Spanish stocks both declined 1 percent.

The falls came despite German business confidence data from the ZEW institute seeing a fifth consecutive rise, largely thanks to the ECB’s efforts to stimulate the euro zone economy.

The region’s car makers, which have been flying along in the fast lane over the last nine months as the euro has dropped 25 percent, were among the day’s biggest losers, down 2.7 percent , as poor sales data saw them hit the skids.

A warning from rating agency Moody’s that a Greek exit from the euro would still have “serious consequences” also cast a shadow over the region.

That came as Greek Prime Minister Alexis Tsipras requested a meeting with top European leaders including German Chancellor Angela Merkel at this week’s EU summit, as his cash-strapped government, which has been locked in an ugly spat with Berlin in recent days, scrambles to stave off bankruptcy.

Chinese shares reached seven-year highs in Asia trading on hopes that the Chinese government would loosen policy to bolster its slowing economy. Japan’s Nikkei climbed to a 15-year high as the yen edged lower after the Bank of Japan maintained its stimulus and its optimistic assessment of the economy at its latest meeting.

Beijing’s use of monetary and fiscal policies to bolster the economy is identical to what happened in the U.S., when the Fed’s quantitative easing in 2009 caused U.S. stocks to soar, said Wu Wenzhe, fund manager at China International Management.

Despite the pause in the U.S. dollar, Brent oil fell towards $ 53 a barrel in choppy trade, copper tumbled 1.8 percent, gold buckled and fellow precious metal platinum slumped to a 5 1/2-year low.

“The sentiment around platinum is quite negative. It’s a combination of supply coming back online after the strikes last year and it’s certainly getting no support from the gold market,” said ANZ analyst Victor Thianpiriya.