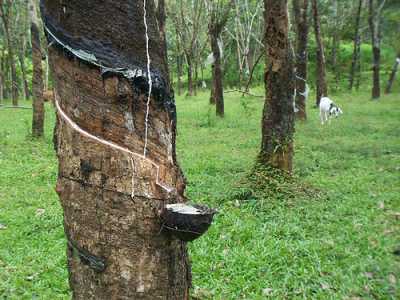 TOKYO: Benchmark Tokyo rubber futures rebounded on Tuesday on the back of a higher Japanese equities market and technical buys, but trade was thin with investors looking to the Federal Reserve’s two-day policy meeting for clues on the outlook of the U.S. dollar, dealers said.

The Tokyo Commodity Exchange (TOCOM) rubber contract for August delivery finished up 1.8 yen, or 0.9 percent, at 212 yen per kg.

“Behind the gain was a strong Nikkei,” said Toshitaka Tazawa, an analyst at Fujitomi Co.

Japan’s Nikkei share average ended at a fresh 15-year closing high on Tuesday, with sentiment lifted by gains in U.S. and European shares and expectations that Japanese companies could improve their return on equity.

“We also saw technical buys as the chart suggests an upward trend for the near term,” Tazawa said.

TOCOM futures, which set the tone for tyre rubber prices in Southeast Asia, have traded above the 200-yen level since early February after some regions in Southeast Asia entered a wintering period, when rubber trees become drier, resulting in lower yields.

Trading was light on Tuesday as investors were reluctant to lock in fresh positions ahead of the Fed’s policy meeting, dealers said.

The Federal Open Market Committee is scheduled to begin its two-day policy meeting later on Tuesday, and many analysts had expected the central bank to drop the word “patient” from its formal statement on the timing of its first interest rate increase since 2006.

Economists polled by Reuters split almost evenly on whether a rate increase would come in June or later in the year.

The most-active rubber contract on the Shanghai futures exchange for September delivery fell 5 yuan to finish at 12,555 yuan ($ 2,009) per tonne.

The front-month rubber contract on Singapore’s SICOM exchange for April delivery last traded at 142.8 U.S. cents per kg, down 0.1 cent.