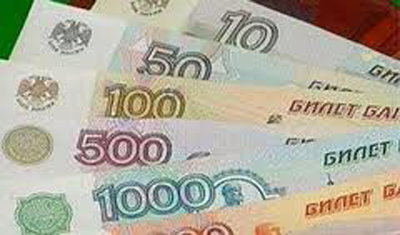 MOSCOW: The Russian rouble fell against the dollar on Thursday as the oil price retreated, eating into strong gains late on Wednesday driven by the cautious policies of the US Federal Reserve.

The rouble had surged to a two-and-a-half-month high against the dollar on Wednesday evening, below 60 roubles to the dollar, after the US Federal Reserve signalled a more cautious stance on raising interest rates than markets had expected.

The Fed’s stance caused a global retreat of the US currency which also helped the oil price, a key driver of Russian assets, surge by around $ 3 per barrel.

On Thursday international oil benchmark Brent was down around 1.6 percent at $ 55 per barrel, leading the rouble to give up some of the previous day’s gains, but oil was still well above the levels seen before the Fed’s statement.

Analysts noted that even without the added fillip of rebounding oil prices, the rouble has been resilient in recent days, largely shrugging off a slump in the oil price last week.

Forex sales by Russian exporters, which need to raise roubles to pay taxes in the second half of each month, are partly behind the rouble’s relative strength. However, VTB Capital analyst Maxim Korovin said in a note that more fundamental factors may be at work.

“We highlight that the peak of external debt de-leveraging is behind us this year,” he said. “If that effect is indeed fading away, we think USD/RUB could scratch on 55.0, even if Brent stays at the current levels.”

Central bank data shows that foreign debt repayments were scheduled to equal $ 15.3 billion in February and $ 17 billion in March, but only $ 5.2 billion in April and $ 4.9 billion in May, implying that companies will need to buy significantly less foreign currency to repay their debts.

Russian stocks rallied on Thursday, pricing in Wednesday’s oil price and rouble rebounds, which largely occurred in the evening when the Moscow stock exchange was closed.