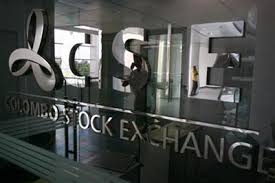 “We don’t expect much to happen in the coming week as everybody is on a wait and see mood and not much of activity is taking place,” said Dimantha Mathew, manager of research at First Capital Equities (Pvt) Ltd.

Foreign investors were net buyers of 67.9 million rupees worth of shares, extending the year-to-date foreign inflow to 3.29 billion rupees.

The central bank on Wednesday said the low interest rate environment is expected to continue benefiting from lower inflation while keeping the policy rates steady.