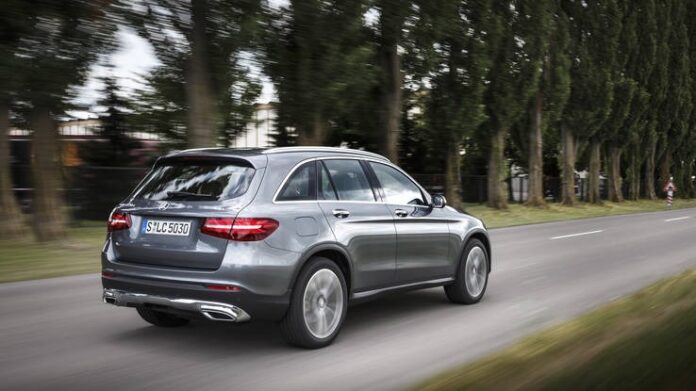 OK. That assertion is ours, prognosticating, but it doesn’t seem like a stretch. The 2016 GLC dusts the SUV it replaces — the 2015 GLK — in just about every respect. The GLC is bigger, more solid, more comfortable and more efficient than the GLK, and probably better looking. It makes a much stronger claim to best in a very competitive class of compact, luxury-brand SUVs.

The new GLC swaps the K in GLK (Kompakt, auf Deutch) for a C to match Mercedes’ compact C-Class sedan. Henceforth, all Mercedes unibody SUVs will be designated GL, with a third letter distinguishing size or market segment: GLA (subcompact), GLC, GLE (mid-size) and GLS (large). The original, 36-year-old body-on-frame G-class (for geländewagen) will continue in its own, rarified world.

In the GLC’s case, at least, the SUV has something in common with its sedan counterpart. It starts with same rear-drive foundation as the new C-class, stretched ever so slightly. The GLC’s 113.1 inch wheelbase increases 4.6 inches compared to the GLK, and its length, 4.7 inches. Its length, width and height match competitors like the Audi Q5, BMW X3 and Lexus NX within a fraction of an in inch. 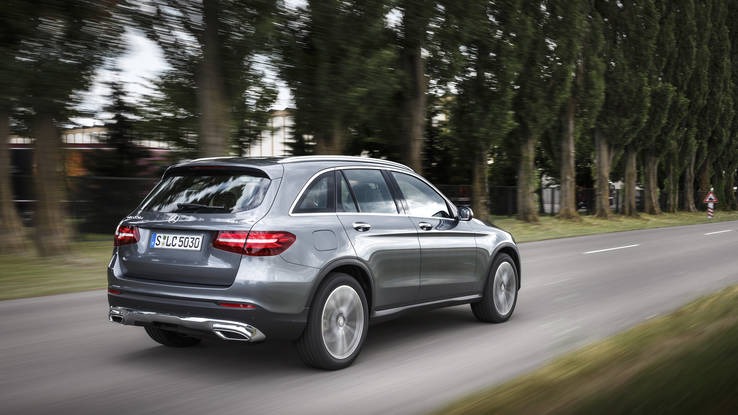 The transmission is Mercedes’ nine-speed 9G-Tronic torque-convertor automatic. The class standard remains six-speeds, and only one competitor offers nine. The optional 4Matic all-wheel drive is reconfigured, with a power take-off and separate multi-clutch center differential, rather than a transfer case integrated into the transmission, as on the GLK. Mercedes says the new packaging reduces weight and wasted energy. The default torque split is 45 percent front, 55 rear.

The GLC will come standard with steel springs, like the GLK, but it adds electronically managed adaptive shocks. It also offers a segment first: optional air suspension, with extra-light, fiber-reinforced plastic air springs.

The GLC is lighter across the board than the GLK, despite is larger, more voluminous shell. With more liberal use of aluminum and high-strength steels in the unibody, and aluminum front fenders and hood, the body-in-white sheds 110 pounds. There are aluminum suspension bits, the lighter 4Matic system and a magnesium case for the transmission. There are also a host of NVH improvements compared to the GLK, starting with acoustic glass and improved engine mounts, yet the larger GLC sheds nearly 180 pounds of curb weight, according to Mercedes, with an identically sized fuel tank. 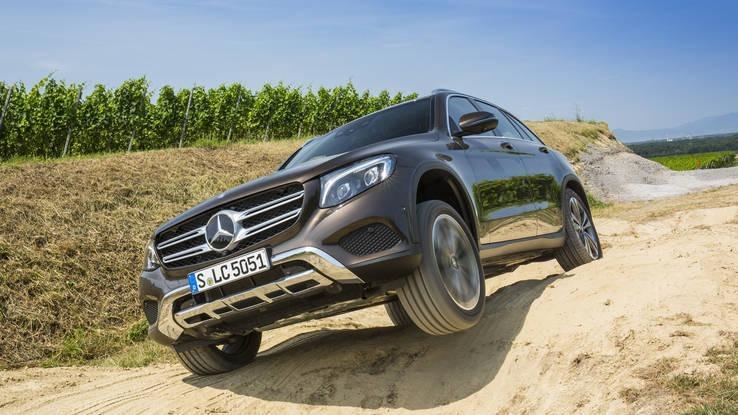 As for the look—well, it’s better than the GLK’s. The GLC follows the more modern aesthetic established by the original GL and carried through the new GLE, rather than the pseudo-rugged, off-road tack of the GLK. On the down side, the GLC is probably less distinctive. It’s more generic, and harder to distinguish from the current Q5/X3/etc., pack. 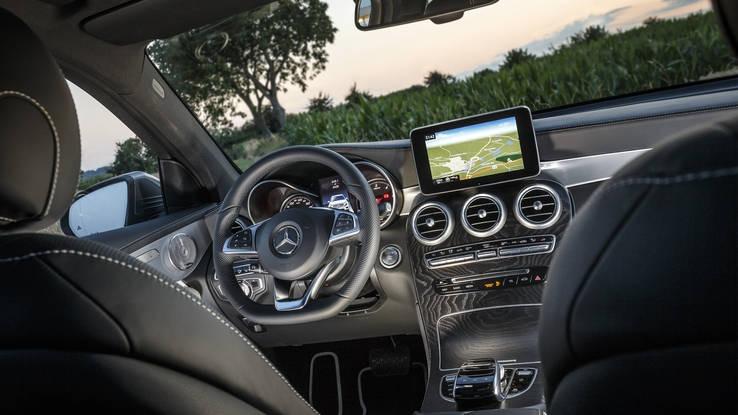 Next up for North America will be a diesel-powered GLC with a 2.1-liter four rated at 204 hp and 368 lb-ft — most likely for the 2017 model year. The GLC350 e plug-in, which debuts elsewhere by the end of this year, is expected in the United States as a 2018. It’s essentially the same package as the new GLE plug-in: an electric motor adding 114 hp and 251 lb-ft, an 8.8-kw lithium-ion battery and a conventional seven-speed automatic. In the GLC, it will increase system output to 335 hp and 524 lb-ft and deliver 20 miles of electric-only range, according to Mercedes.

Mercedes has sold more than 650,000 GLKs since that SUV was introduced in 2008. It’s nothing to scoff at, but in the United States the GLK has consistently trailed the M-class in sales (35,000 GLKs to 46,700 Ms in 2014, for example). Yet as the M-class gives way to the 2016 GLE (essentially an updated M-class), there’s a legitimate chance that the roomier, more substantial GLK replacement will close the gap to the considerably more expensive GLE.

If the current trend continues — more and more luxury buyers ditching sedans for SUVS, with growth concentrated toward the smaller end of the scale — it’s conceivable that the much-improved GLC might eventually overtake the C-class as the best-selling Mercedes of all. 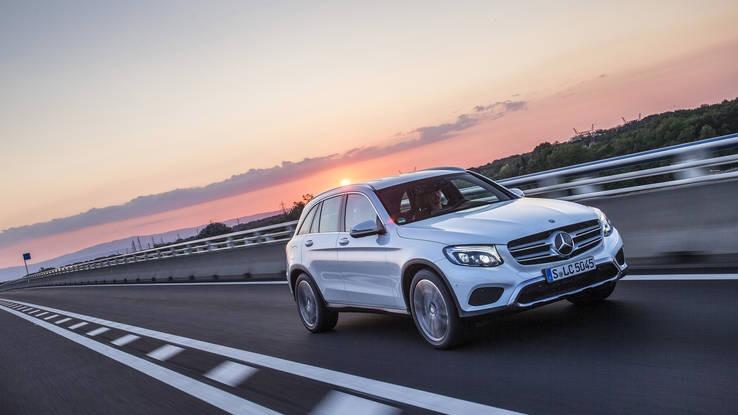 We drove less powerful, Euro-spec GLCs and that complicates things. All signs are positive, nonetheless.

The 2016 GLC probably won’t be as quick as the GLK350 — at least until the hybrid arrives in a couple of years. Exactly how probably is hard to say with conviction, because the GLCs in North America will have at least 30 horsepower and 25 lb-ft more than the Euro models Mercedes offered for evaluation. And while the decrease in full-throttle acceleration rate counts for something, it’s the only place the ’15 GLK has any kind of an edge on the new GLC.

Remember: Mercedes expects a 15-20 percent increase in mileage ratings when the GLC debuts on this side of the Atlantic, compared to the GLK, and maximum braked towing capacity is still a substantial 5,300 pounds. Nor are we suggesting the 2.0-liter turbo is disappointing. It’s less meaty than the GLK’s 3.5-liter V6, and not as smooth when it’s wound up, but it’s lively enough in a vehicle approaching 4,000 pounds. Peak torque should match the GLK V6. All 273 lb-ft are available over a mid-range swath of nearly 3,000 rpm, and the nine-speed automatic takes full advantage. 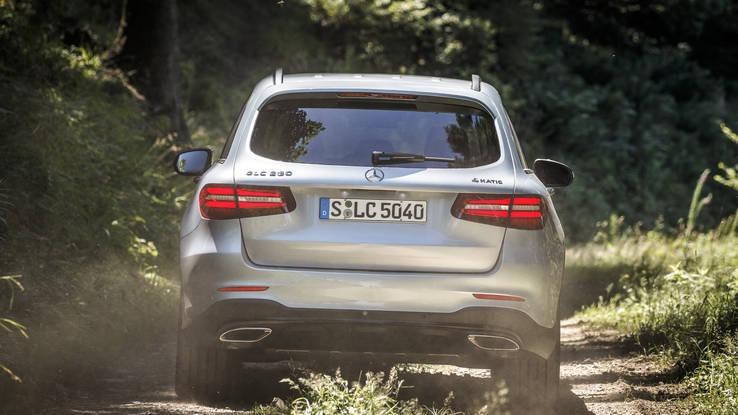 The four-cylinder turbodiesel following in a year is a little torque monster. By the noise inside the GLC, you can never be sure if it’s a diesel or not. The only way to know is standing next to the vehicle when it’s idling. It’s a great engine for just getting around, and with the nine-speed tuned for short shifts, surprisingly responsive. Mercedes seems to be sorting the 9G-Tronic more thoroughly as it goes, in terms of gear selection or throttle reaction. There are definite, useful changes in operation when the control program is switched from eco to sport.

The same applies throughout the vehicle. Wheel damping firms up and steering thickens in sport or sport-plus, and the ride/handling trade-off is more effectively managed than in the conventional-suspension GLK. The optional air suspension goes even further by better managing body roll without significantly stiffening the ride. It also lowers the GLC for easier boarding and loading when it’s parked

All that is good, but the most important difference between the GLC and GLK might be more subtle. The GLC is more solid and substantial — without adding weight and with fewer creaks or rattles and less hum. It feels like a significant upgrade on the GLK almost across the board. It’s more a vehicle that merits a luxury label. 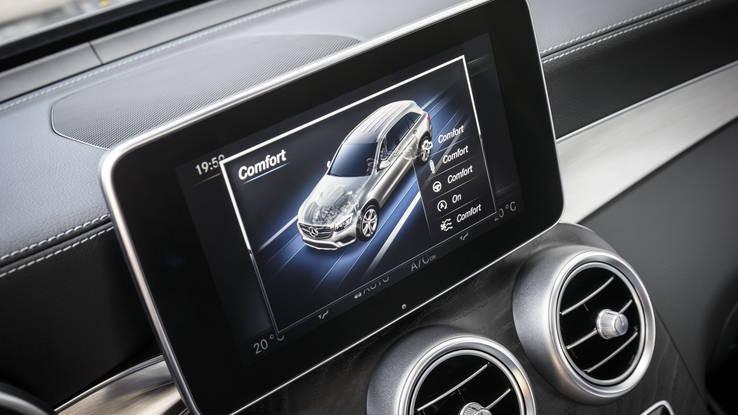 That’s obvious inside. There’s Mercedes’ current thing for video displays that look like an iPad suction-cupped to the dash, yes, but the design is generally attractive and the layout effective. Most significantly, the finish is way, way nicer than the GLK’s, following the path taken by the new C-class as opposed to cheaped-out CLA/GLA. All three of its wood trims look rich and authentic, and the optional stitched MB-Tex covering the dash and upper door panels almost feels like S-class territory.

The GLC’s additional length and wheelbase make more usable interior space — especially in back. There’s considerably more rear legroom and larger rear doors. The rear seat can be adjusted to add cargo space without folding the seat (at the expense of rear-passenger comfort). Maximum cargo capacity increases to 56.5 cubic feet, and the load floor is nearly 6 inches wider.

The GLC’s off-road capability is enhanced, too. It’s almost amazing what some strategically placed skid plates, adjustable ride height and appropriately coded electronic management can do, even with a single-speed center differential. Unfortunately, the Off-Road Engineering Package that adds the skid plates and off-road/hill-descent management modes won’t be offered in the United States, in anticipation of an inconsequential take rate. More-aggressive-looking “sport” bumpers that increase the GLC’s approach and departure angles 5 degrees will be coming — as standard equipment. 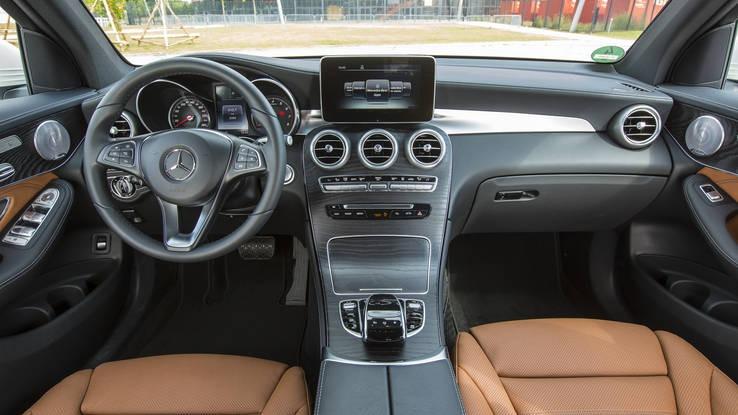 If you had your eye on a GLK, then you want the GLC two-fold, unless you were drawn almost exclusively by the GLK’s unusual appearance.

The 2016 GLC is a more significant departure from the GLK than the new GLE is from the M-class. The GLC may not be particularly exciting from the enthusiast driver’s perspective, but driving excitement wouldn’t seem to be among the top reasons people buy compact luxury-brand SUVs.

The GLC is never sedating, either. It’s up to whatever any driver is likely to ask of it, and it’s a much better transportation appliance than the GLK. It puts Mercedes-Benz on much better footing in a booming, highly competitive category.