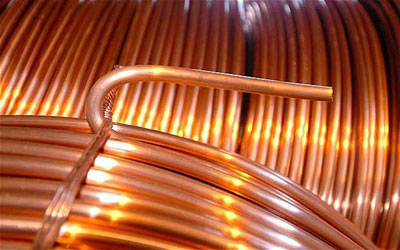 LONDON: Copper hit its lowest in nearly two weeks on Monday, weighed down by a strong dollar, multi-year lows in gold and growing inventories, although upbeat data in China and steadier stock markets there limited losses.

The dollar jumped to three-month highs as expectations of a U.S. rate rise gathered pace and gold plunged to a more than five-year low, hurt by dollar strength and as sellers in China offloaded the metal.

“Over the summer, corporate activity goes into abeyance which means the market will tend to follow more fund-related macro queues. If it’s focusing on the dollar, that suggests prices are going to struggle,” said Citi analyst David Wilson.

“I still think fundamentally copper is not actually looking too bad but macro issues are driving everything short term.”

Three-month copper on the London Metal Exchange was last bid down 0.6 percent in official midday rings at $ 5,445 a tonne.

Weighing on the metal, LME inventories are at 339,775 tonnes, up about 90 percent from levels seen in January. Shanghai Futures Exchange inventories have fallen for the last two weeks.

On the upside, Chinese June home prices rose for a second month in a row, while Chinese equities ended higher on Monday after the country’s securities regulator reaffirmed its support for the market.

“Some improvement in Chinese metals and mining demand can be expected in the coming months, from a low level, on the back of recent policy easing. However, anything less than a substantial pick-up is unlikely to be sufficient to balance metals markets such as copper,” said Goldman Sachs in a note.

Cash tin prices traded at a premium of $ 60 a tonne to the three-month price, their highest since May 2014, though Citi’s Wilson said the apparent lack of nearby supply looked somewhat artificial.

Hong Kong Exchanges & Clearing Ltd (HKEx) has settled two class-action lawsuits against itself and the LME over allegations of anti-competitive and monopolistic behaviour in aluminium markets.