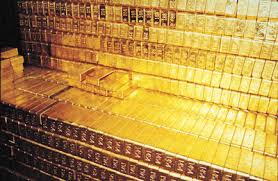 ,100 on Chinese selling” alt=”Gold hits five-year low under ,100 on Chinese selling” width=”278″ height=”181″ src=”https://globalrubbermarkets.com/wp-content/uploads/2021/09/gold-falls-1-pct-as-dollar-rises-on-fed-rate-hike-expectations.jpg”>LONDON: Gold prices plunged as much as 4 percent to their lowest in more than five years on Monday as sellers in top consumer China offloaded the metal.

Investors have been finding less and less reason to hold gold as an insurance against risk, with the dollar strengthening ahead of what is expected to be the first increase in U.S. interest rates for nearly a decade.

Spot platinum fell for the fifth straight session, down 5 percent to a fresh 6-1/2-year low of $ 942.49 an ounce, due to oversupply, sluggish demand and weaker gold prices, which encouraged speculative selling.

“The Asian market missed the action on Friday when U.S. players were already attempting a break of $ 1,130, a major support level, and has pushed prices much lower today,” ABN Amro analyst Georgette Boele said.

“Last week was an important week: you got Yellen, a three-month high in the dollar and good U.S. economic data … there is a chance that we see more downside in coming days.”

More than 3 million lots traded on a key contract on the Shanghai Gold Exchange, compared with fewer than 27,000 lots on Friday, Reuters data showed. Before Monday, the volume for July had averaged fewer than 30,000 lots.

Traders said it appeared that sellers had taken advantage of a low-liquidity environment, with Japanese markets shut for a public holiday, fuelling speculative selling.

In wider markets, the dollar hit a three-month high against a basket of currencies, making dollar-priced gold more expensive for holders of other currencies.

China said on Friday its gold reserves were up 57 percent at 1,658 tonnes at the end of June from the last time it adjusted its reserve figures more than six years ago.

“This implies stockpiling of around 100 tonnes per year, which is dramatically lower than market expectations,” Citigroup said in a note.

Gold fell more than 1 percent on Friday, pressured by increased bets on a Federal Reserve rate rise this year, which would increase the opportunity cost of holding the metal.

Spot silver, the least hit among precious metals in Monday’s slide, was off 0.4 percent at $ 14.80 an ounce.