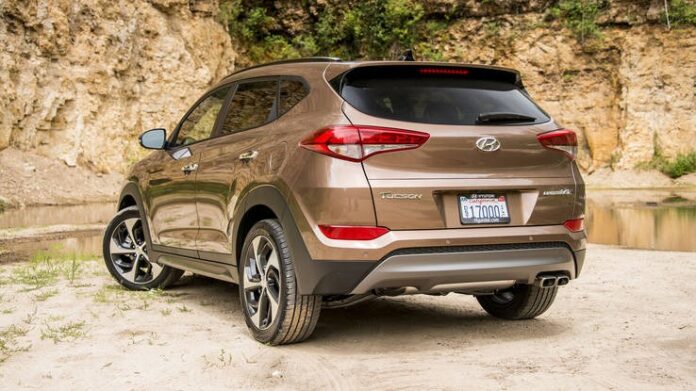 Redesigned crossover transforms itself to take on segment veterans

The new 2016 Hyundai Tucson is a counterpoint to some recently updated competitors that have nearly abdicated on exciting designs.

All-new for the 2016 model year, the 2016 Tucson has grown 3 inches in length and 1.1 inches in width, while interior cargo room has gone from 25.7 cubic feet in the outgoing model to 31 feet. The exterior design has taken on a sharper look, with the Tucson now sporting the corporate hexagonal grille with repeating horizontal lines, that complement the horizontal lines of other parts of the front fascia. The headlights have acquired an angular look as well, while the sides of the doors have traded the slabby look of the outgoing model for nicely sculpted concave surfaces accentuated by sharp character lines at the shoulder and below the sills.  Large fog light housings with LED elements now sit below the headlights, giving the front fascia a top/bottom visual balance as well as a sporty look.

The result is a more unified and uncluttered look, one that succeeds in communicating motion as well as surface tension, with the rear fascia continuing to use angular design elements. The rakish rear glass is topped with an integrated roof spoiler that lends the rear of the crossover a sporty look, one that is helped by the high-set rear bumper and its accompanying elements. The wheelarches, meanwhile, are sculpted with a distinctive kick in their rear halves, accentuating the sense of motion. 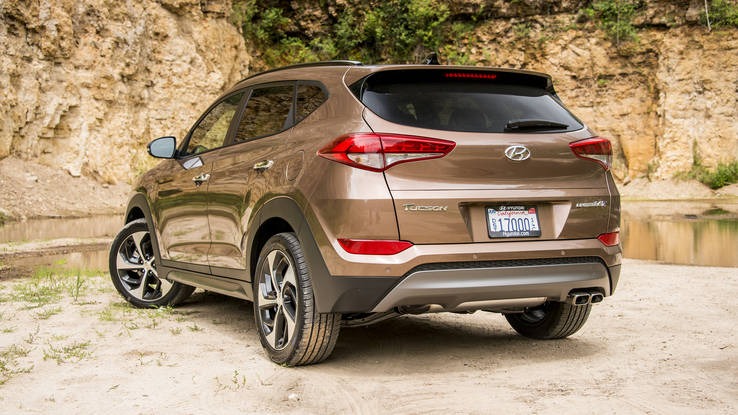 The exterior has received a fresh and bold redesign, one that makes the design itself a selling point rather than a non-issue. Photo by Jay Ramey

Powering the Tucson is a choice of two four-cylinder engines, with a turbocharged 1.6-liter joining the lineup and a naturally aspirated 2.0-liter continuing on with some minor changes. The 1.6-liter is good for 175 hp and 195 lb-ft of torque, while the 2.0-liter unit produces 164 hp and 151 lb-ft of torque. The new 1.6-liter unit is geared toward early peak torque delivery, which starts at just 1,500 rpm and keeps up through 4,500 rpm, with the turbocharger offering low-inertia turbo-spooling responsiveness which offers up boost early on.

The new 1.6-liter engine will be available exclusively with a seven-speed dual-clutch automatic transmission of Hyundai’s own design, aimed at greater fuel economy as well as quicker and less perceptible shifts. Hyundai went with a DCT in favor of a continuously variable transmission to be able to make use of more torque and to maintain familiar acceleration characteristics. Coupled with the new 1.6-liter engine in the Eco model, the Tucson returns 26 mpg in the city and 33 on the highway for a combined 29 mpg, representing a 5 mpg improvement over the outgoing 2.4-liter engine. The 2.0-liter engine, meanwhile, will be paired with a six-speed automatic transmission; front-wheel-drive models will return a respectable 23 mpg in the city and 31 mpg on the highway, for a combined 26 mpg. All-wheel drive will be an option with both engine choices, with this system utilizing Active Cornering Control which transfers torque to the wheels that have the most traction at any given point. The Tucson’s all-wheel-drive system, which the company expects to be more popular on the right coast rather than the left, will also feature Hillstart Assist and Downhill Brake Control to help conquering steep hills.

Hyundai is making a few changes to its popular Santa Fe and Santa Fe Sport, and has also announced pricing for the 2015 model-year SUVs. The current Santa Fe has been on sale since 2012 when the third …

Hyundai sought to improve ergonomics and NVH in the third-gen Tucson, enlarging the engine mounts to keep vibration out of the cabin and using structural adhesive to keep road noise out. Ventilated front seats — a segment first — as well as LED headlights and daytime running lights, an LCD cluster, available 19-inch wheels (17-inch wheels are standard) and convenience features like an automatically opening rear liftgate all help the Tucson feel more expensive than it is. A 5-inch LCD touchscreen display is standard, and includes a rearview camera as well as Apple Siri eyes free integration, Pandora internet radio and Yelp. An 8-inch touchscreen is an option, as is an eight-speaker audio system with SiriusXM with traffic, weather and sports. 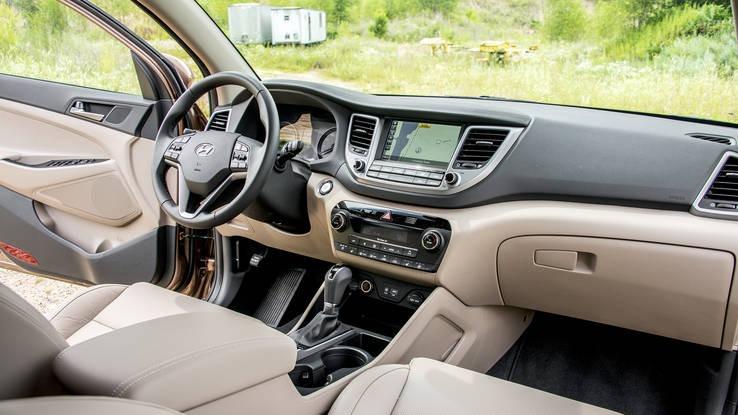 The interior has received an all-new look, as well as premium features like available ventilated seats. Photo by Jay Ramey

We spent a day in both front-wheel-drive and all-wheel-drive versions of the Tucson, experiencing a variety of different roads, and came away impressed with its handling  and ergonomics. The cabin is well proportioned and, in the top trim level we drove, features expensive-feeling surfaces. It’s easy to find a comfortable seating position, and the seats themselves provide good support; the availability of ventilated seats is a vehicle that starts in the low $ 20,000 range is a minor miracle. The panoramic sunroof, meanwhile, seemingly occupies the entire roof, and it lends the interior an upscale appearance though we’re not sure if we’d pick this option in sunnier climates.

Gone is the wobbly, top-heavy feel of the first-generation Tucson in exchange for a well-controlled ride and impressively quiet cabin. The turbocharged 1.6-liter engine coupled with the new seven-speed offers plenty of power almost from the start despite a hint of initial turbo lag; the turbo performs without drama and really without much noise at all under moderate acceleration. In contrast with a CVT, the choice of dual-clutch automatic pays off in the form of quiet operation and relatively agile response to deceleration, though downshifts could still be a bit quicker. 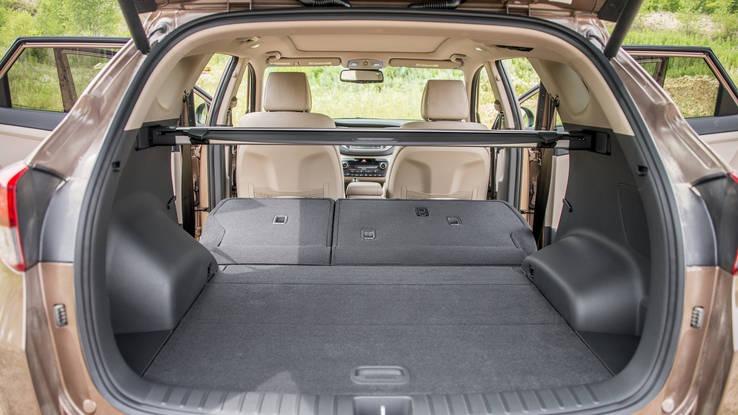 The 2016 model is three inches longer than the version it is replacing, and attention has once again been paid to interior volume. Photo by Jay Ramey

Good road manners and a well-proportioned cabin set the Tucson apart from its competition, which includes segment stalwarts like the Honda CR-V, Nissan Rogue, Ford Escape and the Toyota RAV4 — it has transformed into an expensive-feeling CUV seemingly overnight. With the debut of the third-gen Tucson, the company has shown that there is no need to sacrifice handling or compromise with a CVT in order to achieve fuel economy in a small family truckster.

As far as we’re concerned, its the Mazda CX-5 and the Tucson that are leading the pack right now, though we expect to see new entries in this segment from now till the self-driving overlords fully take over.